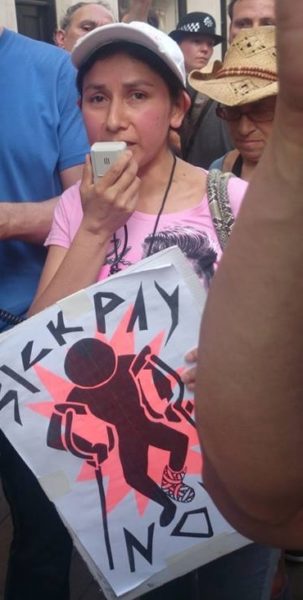 Sotheby’s contractor Servest has just written to the cleaners who participated in the peaceful, lawful protest for sick pay on Wed 1st July. The “official” reason for banning them from site (aka sacked) is: “Sotheby’s has instructed us to remove you from their site with effect from 1st July 2015….because your involvement in the recent protests was a deliberate act to disrupt Sotheby’s lawful business which may have resulted in a significant loss of revenue, and could have put their business at risk”.

Shame on them! Also, Sotheby’s has been mixing their excuses: first they banned them from site because they had allegedly “threatened to assault Sotheby’s clients” (we may sue them for defamation for that allegation), then they said it was because the cleaners lack the “necessary qualifications and competencies”, now they’re saying its because they could have “put Sotheby’s business at risk”.

Stay tuned for many upcoming actions against Sotheby’s until we get the “Sotheby’s 4” reinstated! This is an attack on all workers who need and want to fight for dignity, respect, & decent wages. Please keep Tweeting, Facebooking, calling and writing to Sotheby’s! Thank you for your solidarity.