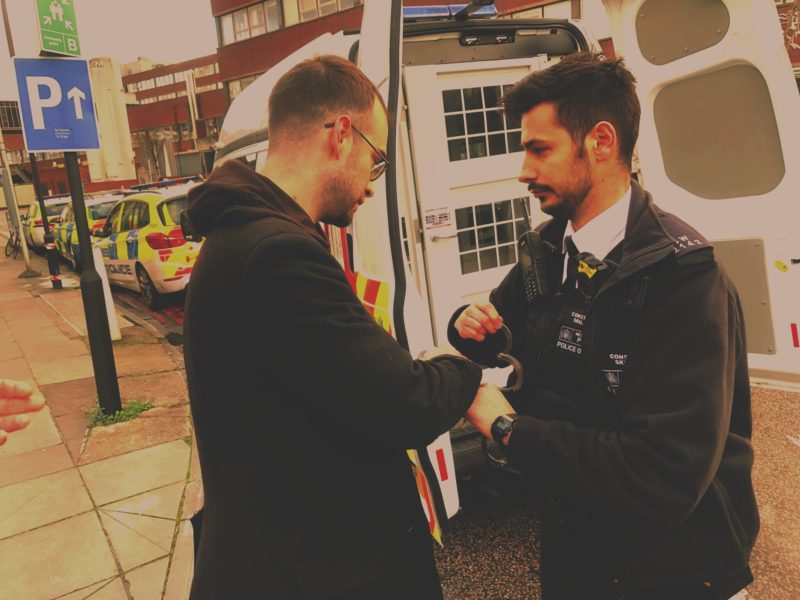 The prestigious medical school of St. George’s, University of London, found itself embroiled in controversy today, after a barrister and trade union official was unlawfully arrested on a picket line during an industrial dispute over the role of outsourcing at the university.

The independent trade union United Voices of the World (UVW), who organised the industrial action, has said that the arrest marks a potential watershed in industrial relations and could set a dangerous precedent for the erosion of civil liberties and workers’ rights if left unchallenged. The incident, which took place shortly after 9am, saw 12 police officers arrive at the university after being called by management to dispel workers and trade union officials from a lawful picket. In a series of highly irregular events that has seen the Metropolitan Police become the subject of legal action, police officers swiftly issued workers and union officials with a letter from the University claiming that the picket needed to take place outside of NHS property. Several police officers then warned all workers and union officials that they would be arrested if they failed to leave the property within five minutes.

When barrister Franck Magennis of Garden Court Chambers, who is currently seconded to UVW as the head of the legal department, inquired into the legal basis of the warning, he was swiftly arrested and handcuffed, and subsequently de-arrested and released less than five minutes later on the condition that he immediately leave the site. The incident appears to represent an attempt by the Metropolitan Police to use criminal sanctions to frustrate lawful industrial action. Upon his release, Franck Magennis said;

“If my false imprisonment goes unchallenged, that would allow the Metropolitan Police to criminalise what is lawful civil activity, and would have a chilling effect on workers’ ability to stand up to bosses and exercise their civil liberties. Anyone concerned with a worker’s right to take industrial action, and with a citizen’s right not to be arbitrarily arrested, should be seriously concerned about the way the police have acted today. Workers should be allowed to go on strike without being threatened with arrest. This is an outrage.”

Speaking on behalf of her client, Susie Labinjoh, of Hodge Jones & Allen solicitors said, “clearly important constitutional issues are raised by Mr Magennis’ arrest. We will be looking at all legal avenues to ensure that the police are held to account, that trade union members are not criminalised for going on strike, and that people are not arbitrarily arrested.”