Outsourced cleaners at La Retraite Roman Catholic Girls' School embarked on what was set to be the longest school cleaners strike in UK history but shortly had their demands met, winning full pay sick pay and much more!

La Retraite Roman Catholic Girls’ School is a prestigious Ofsted rated “outstanding” school in leafy Clapham South London, but for years the school’s treatment of its cleaners – a majority migrant and Latin American workforce – was far from “outstanding”. Outsourced onto one of the lowest levels of pay and the worst T&Cs of all the workers in the school, the cleaners had been left to scrape by for decades on poverty pay and without full pay sick pay.

When the pandemic hit, they found themselves, like so many other low-paid, precariously employed migrant workers, dubbed “key workers” and lauded as “heroes” by politicians and the press alike, and like so many other low-paid “key workers”, they kept on working through the deadly pandemic. But despite risking their lives to keep La Retraite clean and it’s students safe, it was clear that the rhetoric of a newfound respect for “key workers” was just that, rhetoric.

In the run up to Christmas, La Retraite cut the cleaners’ annual working hours by 30 in a bid to save a few pennies. When around half the cleaners refused to accept this reduction they were all sacked, but their dismissals were revoked once they submitted “letters under protest”. The cleaners’ also had their request refused for the school’s contractor, Ecocleen, to comply with its legal obligations and carry out a risk assessment in consultation with them.

By January it was estimated that 25% of UVW’s members at the school had caught Covid-19, so with the cleaners belief that their safety was in serious and imminent danger, and with the school’s refusal to give them proper sick pay, they walked out under Section 44 of the Employment Rights Act 1996.

The cleaners made it clear they would not return until their safety concerns were addressed, and after refusing to work for a month their demands were eventually conceded, but things got worse. In retaliation for the defiant yet lawful walkout Ecocleen decided to withhold the workers’ wages,  pushing many of them below the breadline. Not long after, the cleaners were also threatened with disciplinary proceedings in relation to UVW campaign materials on social media.

Fortunately, and under mounting pressure, Ecoleen saw sense and dropped the case against them, but the fight for the “walkout wages” continued. Weeks later the cleaners returned a whopping 100% yes vote in favour of strike action and were determined to go big, declaring a 40 day strike, the longest school cleaners strike in UK history!

The vote for strike action coupled with support from Lambeth NEU spooked management into coming to the negotiating table. However, despite the cleaners’ best efforts to settle the dispute at the eleventh hour, having secured 4 out of 5 of their demands, La Retraite held firm on keeping them on the statutory minimum sick pay scheme, unlike the teachers who got full pay sick pay.

This was a red line for the workers who argued that denying them the same sick pay scheme as teachers was a health and safety risk, unfair and discriminatory. With the possibility of a settlement looking near impossible, the cleaners went on strike and began to prepare banners, balloons, face masks and petitions to make the first picket at the school – planned for the third day of the strike – a fiesta that neither La Retraite nor its students would forget.

As word of their struggle started to spread, the cleaners began receiving widespread support for their demands, with current and ex-students vocally criticising La Retraite on social media, and the local MP and a famous celebrity vowing to come down and speak in support of the workers at their first picket. But with the threat of a lively picket just days away, and with the threat of the cleaners bringing several legal cases against the school, management realised the game was up.

The cleaners secured a whopping 24% wage increase, improvements to health and safety, recovered most of their “walkout wages” and won the same sick pay scheme as the teachers at the school.

The victory is a testament to the continued power of strike and direct action and marks UVW’s third victory in the state school sector and the second time UVW members have achieved parity in sick pay with in-house staff. 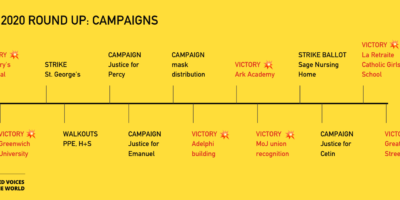 Donate to our strike fund and support our workers!