Underpaid and overworked café workers at the University of Greenwich decided to go on strike for the London Living Wage and drastic improvements in their working conditions and won!

Workers at the University of Greenwich’s main cafeteria had been outsourced to BaxterStorey, resulting in understaffing, low pay, disrespect, and less sick pay than other university staff. The entire team joined UVW, some having worked in the café for over 20 years, and decided to take strike action for the London Living Wage (then £10.55). When they announced their campaign, BaxterStorey immediately gave them a 50p pay rise bringing them up to £9.75 — still 80p short of the LLW and lacking all the other protections and conditions other university staff received.

Cafe workers were consistently overworked, and everyone felt that conditions had taken a turn for the worse since BaxterStorey had been contracted to run the cafe. The chef was even hospitalised after collapsing on a bus home after a particularly stressful day! Struggling to survive on a low-wage existence, they had no alternative but to strike!

Workers took 4 days of strike action in October 2019, with support from academic staff at the university. A protest was staged at the annual student graduation ceremony, and protesters also occupied a top-level university board meeting. A full boycott of the cafeteria was encouraged.

With yet more strikes, protests and actions in the pipeline, news came in early January 2020 that all outsourced workers at the University of Greenwich, including café workers, cleaners and security guards would henceforth be paid the London Living Wage, with the same occupational sick pay and holiday entitlement as directly-employed staff!

“I have worked at the Greenwich Café for over 20 years. I like working here, but the work is very stressful and I don’t feel that I am treated with the respect I deserve. The wages are too low and we also deserve to be treated better. This is why I joined the union.”

Fight for your rights: the trade union for outsourced workers 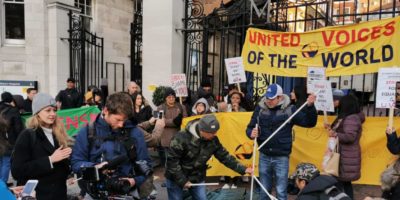 The London Living Wage amounting to a 23% pay rise!