Topshop, part of the Arcadia Group owned by tax cheat Sir Phillip Green, had outsourced its cleaners onto poverty wages and the lowest terms and conditions legally possible. But when the cleaners began to fightback, management got a lot more than it bargained for.

Topshop’s flagship store goes up five floors on London’s Oxford Street, selling average-to-low quality fashion wear (made in sweatshops) at hefty markups. It is part of the Arcadia Group, mostly owned by Sir Philip Green — a serial tax cheat who lives lavishly in Monaco with his tax-cheating wife, luxury yachts and a private jet.

Cleaners at the Topshop/Topman emporium worked for Britannia Services Group — a typical minimum wage, maximum profit outfit. Susana, a member who now works full-time for UVW, was called “donkey” by an abusive supervisor who kicked a bucket at her. This triggered stress-related depression but she continued working for five more years, until UVW took up her cause for the London Living Wage (LLW), resulting in her suspension after more bullying. A Change.org petition was signed by over 37k people, and the cleaners wages were raised to the minimum wage + 30p. This was still almost £2 less than LLW, so protests went full steam ahead.

The protests included 600 flyers planted in the pockets of garments, announcing the hypocrisy of Topshop claiming to “fully subscribe to the concept of the living wage” while contracting services to poverty wage employers. Shadow Chancellor of the Exchequer, John McDonnell, joined the demonstration amid red smoke and placards highlighting the absurdity of owner Sir Philip Green being worth over £4bn.

In February 2019, a tribunal finally ruled unfair dismissal with compensation of around £40k for Susana. The judgment (PDF) was covered by BBC News and most major newspapers.

The #Topshop2 were Susana and Carolina, a colleague who had also been suspended for trade union activity. In February 2019, a tribunal finally ruled unfair dismissal with compensation of up to £75k for Susana. The judgment (PDF) was covered by BBC News and most major newspapers.

“In 2013 I found a light at the end of all the darkness. I had suffered abuse and physical aggression at work and I was exhausted of seeing the injustices suffered by my colleagues.

And then I met Petros [a UVW organiser] and I explained my case to him. I loved it when he said, “yes, legally its past the date, but who says that doesn’t mean we can’t get you justice?”.

That’s when I had hope and began to be interested in trade unionism. Before then I didn’t even know what a ‘union’ was. I started to learn about trade unionism and it gave me faith to be able to organise to improve our conditions and above all end the abuses of power, harassment and discrimination at my work.

It was a long and painful journey to victory, but I am so thankful to UVW. ¡Hasta la Victoria siempre!” – Susana, former Topshop cleaner and UVW Head of Casework 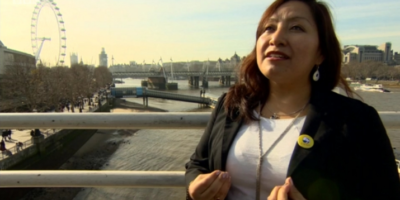 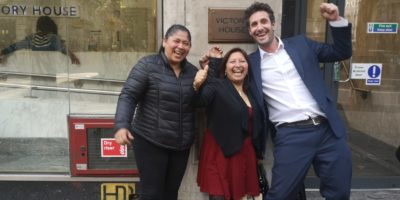 The Topshop two fight in the courts!