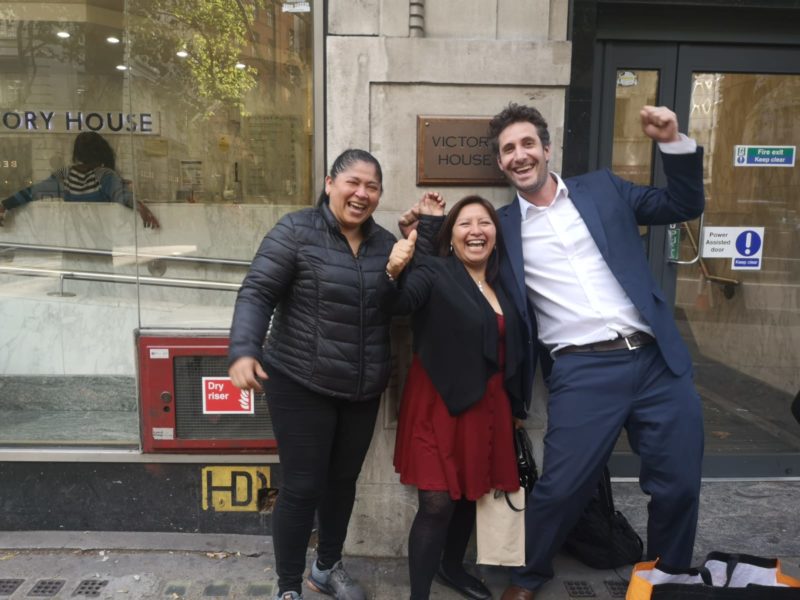 Philip Green’s cleaning contractor at Topshop, Britannia Services Group, has admitted today in open court to having sacked UVW members Carolina and Susana (The Topshop Two) for their roles in organising the campaign for a living wage in 2016!

In a remarkable turn of events today Britannia conceded both ordinary and automatic unfair dismissal before Carolina’s hearing even commenced and confessed that the reason they sacked her was because she was a member of UVW, participated UVW’s activities, and made use of UVW’s trade union services.

That astounding concession is testament to the weight of evidence against them and the dishonesty of their witnesses who were likely waiting in trepidation at the prospects of the amazing cross examination of Akua Reindorf, our barrister in the case acting pro bono for UVW. (https://www.cloisters.com/barristers/akua-reindorf)

Britannia have stubbornly not conceded the same in Susana’s case which took place over a 5 day hearing which ended today. However, it was shown beyond doubt on the evidence and under cross examination what we have always contended that she was dismissed in breach of her trade union and human rights for having recruited her colleagues into UVW and organised them to fight for a living wage.

The evidence also showed that Topshop was fully aware of and even called for Susan’s sacking. In other words one of the biggest retailers owned by one of the richest men in Britain stamped over the trade union and human rights of their lowest paid workers for having dared to ask to be paid a living wage.

UVW is so proud to have Susana and Carolina as members of our union and community, and they should be an inspiration to the whole union movement.

Thank you Truth Legal for taking on Carolina’s case.