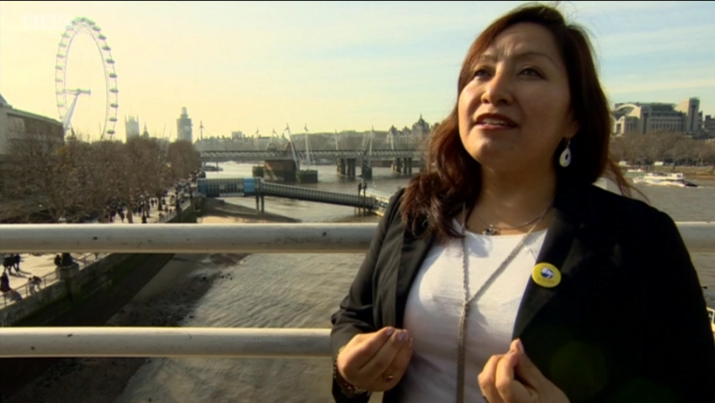 Susana Benavides has been a full-time UVW organiser ever since being unfairly dismissed from her Topshop cleaning job by her direct employer Britannia Services Group. At last, a tribunal has ruled that she was sacked principally due to her union-related activities, rejecting Topshop’s key argument that a union’s “typical activities” cannot include “large scale public direct-action protests.”

In March of 2016, Susana was instrumental in organising a well-attended UVW protest outside her former workplace on Oxford Street, which was met by a full legion of police. Unlike typical unions, UVW is known for its large scale public direct-action protests.

This ruling has been covered on BBC News and in various national newspapers.

From our campaign page:

Susana was called “donkey” by an abusive supervisor who kicked a bucket at her. This triggered stress-related depression but she continued working for five more years, until UVW took up her cause for a London Living Wage (LLW), resulting in her suspension after more bullying. A Change.org petition was signed by over 37k people, and cleaner wages were raised to the minimum wage + 30p. This was still almost £2 less than the LLW, so protests went ahead.

These protests included 600 flyers planted in the pockets of garments, announcing the hypocrisy of Topshop claiming to “fully subscribe to the concept of the living wage” while contracting services to poverty wage employers. Shadow Chancellor of the Exchequer, John McDonnell, joined the demonstration amid red smoke and placards highlighting the absurdity of Topshop owner Sir Philip Green being worth over £4bn.