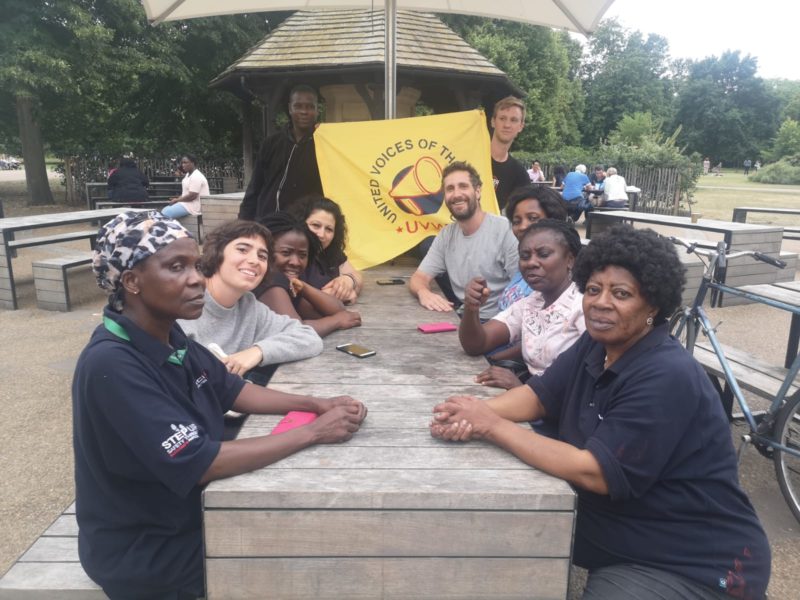 Workers who clean and maintain London’s world-famous Royal Parks are set to walk out on strike in protest at poverty wages, causing a major embarrassment for Buckingham Palace.

The cleaners, who scrub toilets and other public facilities in some of the capital’s most iconic green spaces – including Hyde Park, St James’s Park and Kensington Gardens, all of which are hereditary possessions of the Crown and managed by the UK government on behalf of the Queen – are currently paid just £8.21 per hour, well below the basic London Living Wage.

“I have worked at the Royal Parks for 24 years, but these poverty wages mean that, like many of my colleagues, I’m living a hand-to-mouth existence,” said Genevive Boohene, a Ghana-born Royal Parks cleaner. “We are denied occupational sick pay, many of us do not receive our legal entitlement to holidays, and managers ignore our suffering and concerns. Now we are coming together to change things for ourselves.”

The workers, who have been serving the Royal Parks for nearly 200 years between them, are fighting to be paid the London Living Wage of £10.55 per hour – an independently-calculated figure representing the minimum income that a worker in the capital needs to get by. They are also demanding occupational sick pay and full statutory holiday entitlement, to bring them into line with the basic protections enjoyed by most UK workers.

“We take great pride in our work,” said Sadiq Quadri, who has been employed at the Royal Parks for a decade. “We have been forced to strike because there seems to be no other way of getting those in charge to pay attention to what’s happening to us, and to end this grossly unfair treatment.”

Quadri and his fellow cleaners are managed by VINCI, a construction and facilities company operating in more than a hundred countries worldwide that has been accused of multiple labour and human rights abuses. The outsourcing giant has been embroiled in corruption scandals in Russia and accused of mistreating workers in Qatar, while in the UK it was one of the major forces behind the secret ‘blacklisting’ of trade union members in the construction industry – for which it has been forced to apologise in court and provide compensation to workers. Under the terms of its contract, the Royal Parks currently pay VINCI £7 million per year.

Cleaning staff will formally ballot for strike action in two weeks’ time, after joining United Voices of the World (UVW) – an independent, members-led trade union that represents outsourced and low-paid workers in London and beyond. Having already racked up a series of high-profile victories against major companies and organisations in recent months, including Topshop, Chanel and the Royal Borough of Kensington and Chelsea, UVW is now setting its sights on the Royal Parks, which manages over 5,000 acres of Royal parkland across the city.

“The Royal Parks make much of their public mission to maintain the parks for the well-being of all who use them,” commented Petros Elia, an organiser with UVW. “Yet they are wilfully impoverishing their own hard-working cleaners who have been caring for these amazing green spaces on behalf of the general public for many, many years – and who are struggling to survive on a daily basis because of the woeful pay and conditions that are forced upon them.”

“Hiding behind VINCI – an odious company with a terrible global reputation for abusing workers – is no excuse,” added Elia. “The Royal Parks negotiate their own outsourcing contracts and are responsible for the terms of them; they could end this dispute in an instant by insisting that all of the workers in their parks are paid fairly and treated with decency and respect. Last year VINCI boasted a net income of £2.7 billion, while the ultimate owner of the parks, the Queen, has an estimated personal wealth of £425 million. The money is clearly there to meet the basic, modest demands of the parks’ cleaners, and UVW will fight all the way to make sure that happens.”

The Royal Parks are used by approximately 80 million people a year, and any strikes are likely to fall within the school summer holidays, when visitor numbers are at their highest. In a move which will pile further pressure on managers, office staff at the Royal Parks who are represented by the PCS union have committed to supporting walk-outs by their colleagues on the cleaning team.

Further quotes from Royal Parks workers and photos are available on request.