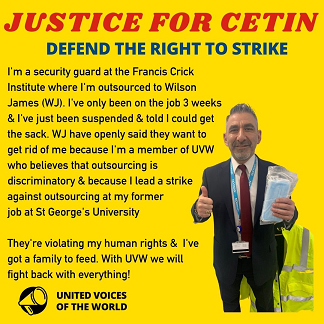 Trade union United Voices of the World (UVW) has vowed to apply for a high court injunction to stop the dismissal of Mr Cetin Avsar, a security guard employed by security, aviation and construction company Wilson James to work at the Francis Crick Institute in Kings Cross, London, in what UVW has described as “a blatant and egregious breach of Mr Avsar’s human rights.”

The full grounds of his disciplinary hearing taken from the letter of invitation are:

In you (sic) most recent employment with Noonans (sic) where you were employed as a Security Officer for about 2.5yrs at St. George’s University, you were leading a campaign to be taken in-house and given the same terms as all in house employees. The union you have joined and who have supported you in your campaign are United Voices of the World (UVW), who in their words ‘believe that outsourcing is antiquated and discriminatory’. You planned a 13 day strike action earlier in the year to protest on the above. Wilson James are also a contractor, which fundamentally means that there is a conflict of interest between your opinion and work with the union which lead to your protesting, and your employment with Wilson James”.

Speaking in response to his suspension and threatened dismissal, Mr Avsar said the following:

“I am totally shocked by the way Wilson James is treating me. They are totally victimising me for being a member of UVW union and for having taken lawful strike action against my previous employer Bidvest Noonan at St George’s of London. This has caused me a lot of distress. I have done nothing wrong. They are breaching my human rights and I will not stand for it”.

“In my 8 years as a trade unionist I have never seen such a blatant and egregious violation of a worker’s human rights. This is far more than just a case of victimisation – Mr Avsar is also being punished for his beliefs that outsourcing, a practice which more often than not sees BAME and migrant workers in London receive inferior pay rates to their White in-house counterparts, is racist, discriminatory and unjust. The hypocrisy of Wilson James is staggering. They have slapped a Black Lives Matter poster on the front of their website and waxed lyrical about how their industry “needs to do more for those from BAME backgrounds”, but in the same breath are unlawfully punishing a BAME key worker for having taken lawful industrial action against a great institutional racism at his former workplace”.

“This is a violation of at least two of Cetin’s human rights under the European Convention on Human Rights, the rights to Freedom of thought, belief and religion and Freedom of Assembly and Association and we will apply for interim relief if he is dismissed and an injunction to try and prevent his dismissal in the first place. We will win and we will make  Wilson James regret they ever dared go after one of ours”.

You can support Cetin by writing to Wilson James directly via our Action Network Campaign. Click here!