With their glitzy flagship store located in the heart of New Bond Street and surrounded by other big name brands, Chanel thought it could get away with paying its cleaners poverty wages and leaving them understaffed and victimising a workplace organiser, but oh how wrong they were!

A group of Latin American cleaners at a Chanel store were underpaid, understaffed, and overworked. Once they began to organise themselves they also had to contend with the unfair dismissal of their colleague and lead organiser. But a partial victory in March saw them awarded a 10% pay rise from £8.21 to £9.10 per hour after they made it clear they were willing to strike. But this was still well short of the then London Living Wage of £10.55 which was plainly within reach – not to mention the £2,000 price tags on some of the handbags – so with the other demands still not forthcoming, the cleaners decided to ballot for strike action.

The placards and a large banner were ready and waiting, along with drums and (rumoured) stink bombs, to be deployed on the narrow New Bond Street where Chanel, Dior, Louis Vuitton and Hermes have gleaming storefronts. Naturally, Chanel’s managers did not want to be embarrassed in front of their glitzy neighbours — all for the sake of skimping on their own cleaners.

So a decision was made by Chanel to concede to most of the demands with a desperate Chanel management sending a flurry of emails the evening before the planned protest as a last minute attempt to stop the showdown. That evening it was confirmed in writing that the workers would receive the London Living Wage and that negotiations would be entered into regarding the other demands. 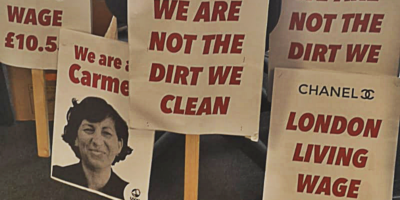 Chanel cleaners win the London Living Wage the day before a big protest!

The London Living Wage was won after workers announced to protest.