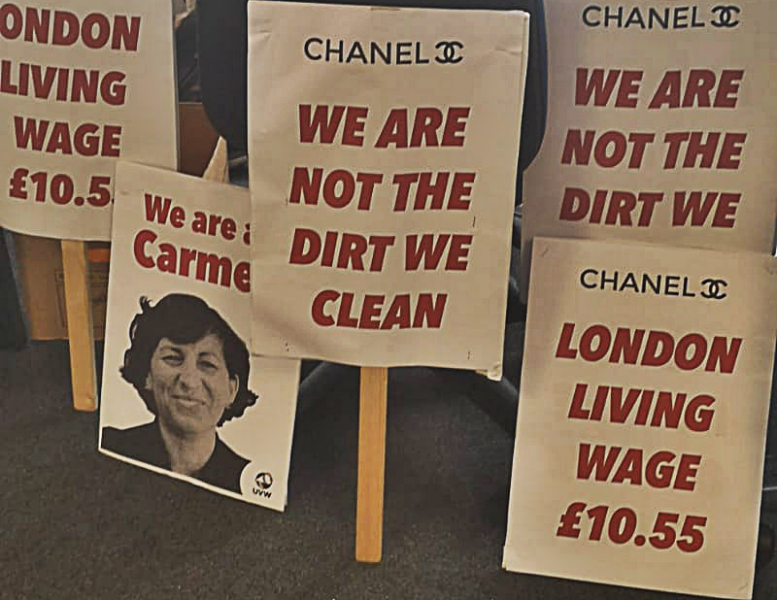 Chanel cleaners win the London Living Wage the day before a big protest!

A major victory for UVW members was confirmed last night, just as plans were being finalised for a noisy and smelly protest this afternoon

The placards and a large banner were ready and waiting, along with drums and (rumoured) stink bombs, to be deployed on the narrow New Bond Street where Chanel, Dior, Louis Vuitton and Hermes have gleaming storefronts.

Chanel’s cleaners, all Latin American migrants employed by Bayleaf Cleaning, had been engaged in a dispute over low pay, an unfair suspension and understaffing. When push came to shove, Chanel’s managers absolutely did not want to be embarrassed in front of their glitzy neighbours — all for the sake of skimping on their own cleaners.

A partial victory in March saw the cleaners awarded a 10% pay rise, from £8.21 to £9.10 per hour, after they made it clear they were willing to strike. This was still well short of the £10.55 plainly within reach (not to mention the £2,000 price tags on some of the handbags), so with the other demands still not forthcoming, the cleaners subsequently decided to ballot for strike action.

Carmen, one of the lead organisers for her Latin American colleagues, was suspended on preposterous charges that were a transparent attempt to shut down the dispute. Bayleaf had also promised an additional cleaner to ease the workload that was causing discomfort and often pain, but nothing had happened for weeks.

A protest was planned for this afternoon (June 1st) and plenty of effort went into making placards and banners. The ballot to strike would surely have been unanimous. At last, a decision was made by Chanel to concede most if not all demands. Yesterday evening, emails then phone calls put a stop to the dispute, for now. The London Living Wage of £10.55 was confirmed in writing. Negotiations will go ahead on the secondary matters.

It’s a tremendous result for yet another group of migrant cleaners, backed by UVW’s simple formula for securing justice in the workplace. They never backed down, only escalated. Despite shaky command of English, and lacking union experience, the victories of so many other UVW members had demonstrated that neither were necessary — and so it proved.

How many other major firms in London have support staff on miserable wages, yet would speedily cough up the extra few quid per hour that make all the difference — if the workers just joined UVW, stood firm and threatened to exercise their right to protest and strike? We’re betting that there are hundreds, if not thousands of firms that would crumble remarkably quickly.

It’s now beyond obvious that migrant workers are perfectly able to drive wages up for themselves and everyone else. Too long we’ve been told the exact opposite of the truth! London’s multicultural workforce can lead the way for the rest of the country, showing the backbone that has sadly disappeared from much of the trade union movement.

UVW continues the struggle with other migrants, as well as legal sector workers and sex workers. Join us!