We are not the dirt we clean – over 80 cleaners at the world famous LSE University demanded parity in pay and terms and conditions of employment with in-house staff and they became the first group of outsourced workers in higher education to end outsourcing.

The London School of Economics is located in the City of Westminster. Admission is highly competitive, and alumni include George Soros, David Rockefeller, 18 Nobel Prize winners, 53 past/present heads of state, and 46 current Lords of Parliament. No other university outside the U.S. and India has educated more billionaires.

Alba, a cleaner at LSE for over a decade, was unfairly dismissed after rising to the ranks of Supervisor and then Office Administrator. UVW had already fought to reinstate three of her colleagues, and now sought justice for dozens of cleaners outsourced by LSE to Noonan Services, owned by a ruthless vulture investment firm.

The cleaners found their cause widely supported across campus, with the student-led Justice for LSE Cleaners campaign stepping up at every turn. UVWs’ slogan “We Are Not The Dirt We Clean” resonated with everyone who witnessed the seven days of strike action from March to June. David Lammy and Caroline Lucas (MPs) also lent support with an Early Day Motion and author and journalist Owen Jones agreed to pull out of a high profile event refusing to cross the picket line.

The striking cleaners, mostly black, brown and migrant, often had other cleaning commitments outside of LSE, but still managed to strike and many of their colleagues came to show solidarity.

The last strike days coincided with end of year exams and featured flashmobs, salsa, zumba, poetry, art sessions, teach-outs. Eventually, and after 10 months of struggle, and the then largest cleaners strike in UK history and the highest number of stirek days of any group of outsourced workers in UK higher education – outsourcing was ended and all cleaners were brought in-house as LSE employees! 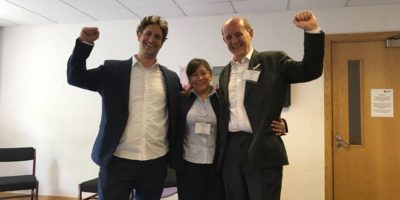 Owen Jones pulls out of LSE event, in support of Cleaners

UVW successfully ended the outsourcing of cleaners at LSE.

The victory made UVW the first trade union to successfully end outsourcing at a British university!