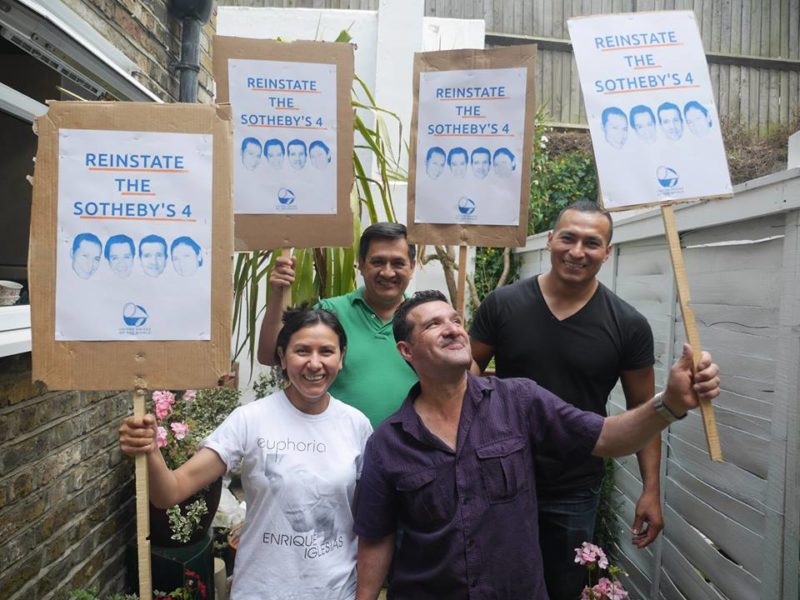 “I understand that Sotheby’s justification for these removals is that the protest “put the business at risk”, which seems to me to be somewhat invalidated by the fact that Sotheby’s sold £130 million worth of paintings at auction that same evening.” – Roger Godsiff MP

On 14 July, the MP for Birmingham Hall Green, Roger Godsiff, tabled an Early Day Motion in the House of Commons condemning the employment practices of Sotheby’s and its cleaning contractor Servest concerning United Voices of the World (UVW) members.

“That this House condemns in the strongest possible terms the employment practices of Sotheby’s and its cleaning contractor Servest, concerning cleaners and porters who are members of the trade union United Voices of the World (UVW); is appalled that Sotheby’s and Servest consider peaceful protest to be an act of misconduct; further condemns Sotheby’s decision to ban from the site cleaners and porters who took part in a lawful, peaceful protest to call for a real Living Wage, contractual sick pay and an end to trade union victimisation; calls on Sotheby’s to backdate the London Living Wage to 1 November 2014 and confirm it will remain a Living Wage employer on 1 November 2015; further calls on Sotheby’s to provide contractual sick pay rather than Statutory Sick Pay, which only provides £35 for the first week when an employee is off sick and £88.45 per week from there on, which means that the cleaners and porters are constrained to work when sick or to allow their families to go hungry; believes that it is disgraceful for such a wealthy company dealing in luxury goods to pay poverty wages to essential workers; and calls on Sotheby’s to reinstate the cleaners and porters who have been banned from the site for exercising their right to protest lawfully and peacefully and to pay all staff the London Living Wage.”

In a joint letter to Sotheby’s Chairman, Domenico De Sole, on 17 July, Dave Anderson MP, Ronnie Campbell MP and Roger Godsiff MP said: “We are writing to you as Members of Parliament to express our great concern about the treatment of low-paid workers at Sotheby’s.

“We understand that members of the trade union United Voices of the World have been suspended from their jobs for asking for contractual sick pay and to remain on the London Living Wage when it increases slightly in November. Without the living wage and sick pay, these cleaners and porters—without whose labour Sotheby’s would be unable to function—will be forced to work when ill or injured or allow their families to go hungry. We find it utterly deplorable that such a wealthy, profitable company, which deals in luxury goods, is willing to deprive these hard-working employees of the means to afford even the basic necessities of a decent life. While we are aware that these employees are contracted out by Servest, we do not consider that this absolves Sotheby’s of responsibility for paying them decently.

“It is also extremely worrying that, following the protest on 1 July, employees who took part were forced to hand over their passes and escorted off the premises. This was a peaceful, legal protest, and it is outrageous—not to mention illegal—that Sotheby’s is attempting to force workers out of their jobs for calling for decent pay and working conditions. It appears that Sotheby’s justification for these removals is that the protest “put the business at risk”, which seems to be somewhat invalidated by the fact that Sotheby’s sold £130 million worth of paintings at auction that same evening.

“It is not the actions of these workers but Sotheby’s own employment practices which is severely damaging its reputation. It is, quite frankly, obscene that a company which makes millions in profits and pays its CEO $7 million per year refuses to pay its staff enough to live on with decency and dignity. A company’s reputation will not be enhanced by the public knowledge that it mistreats and impoverishes its own staff. We urge you to engage with the workers’ representation and work with them to meet the very reasonable request that staff will continue to be paid the London Living Wage and will receive decent sick pay.”

United Voices of the World general secretary, Petros Elia, said: “Sotheby’s is famous for selling masterpieces for millions, so the contrast with cleaners just scraping by could hardly be greater. Their treatment of these four hard-working cleaners has been utterly outrageous. We thank Roger Godsiff for bringing this motion and call on MPs of all parties to support it, to send a message loud and clear that such cold corporate behaviour is simply unacceptable.

“Astonishingly, last year, the Sotheby’s cleaners actually had their hourly wage cut. UVW helped them to fight for and win the London Living Wage, although only from April, despite the current rate of £9.15 per hour coming into effect on 1 November 2014. Sotheby’s refuse to backdate it or pay contractual sick pay. They also refuse to commit to paying the full London Living Wage when it increases in November this year.

“On the evening of Wednesday 1 July, four members of our union – Percy, Barbara, Marco and Jorge – took part in a peaceful protest outside Sotheby’s auction house on London’s Bond Street. The next day, all four were denied entry to work. Our protests are always peaceful yet Sotheby’s employ extra security staff. It must be costing them far more than the relatively small sums we’re asking for. One of the cleaners has been there for six years, a loyal employee, but apparently Sotheby’s couldn’t care less.”

A petition on change.org – https://www.change.org/p/sotheby-s-london-reinstate-your-cleaners-and-pay-them-the-living-wage – which has over 25,000 supporters, says: “We (Marco, Barbara, Percy and Jorge) worked as cleaners at Sotheby’s, the multinational auction house, and have just been suspended from our jobs after calling for contractual sick pay and to keep the Living Wage when it goes up this November. We have effectively been sacked for daring to ask for a decent wage and better benefits.”

UVW is available for interviews.

United Voices of the World (UVW) is a grassroots, member-led trade union comprised almost entirely of low-paid migrant workers in the service sector. The majority of members are of Latin American descent, although increasing numbers of African, British and Eastern European workers are also joining. UVW has a dedicated team of representatives with extensive experience in all manner of employment law issues. It also works closely with the ethical law firm Truth Legal, specialists in accident, assault and employment issues. UVW encourages its members to learn English, study employment law, campaign for the Living Wage and stand against abuse, bullying and discrimination at work.

For media enquiries, contact Neil Kennett on 07986 921 742 or email neil@featurebank.co.uk