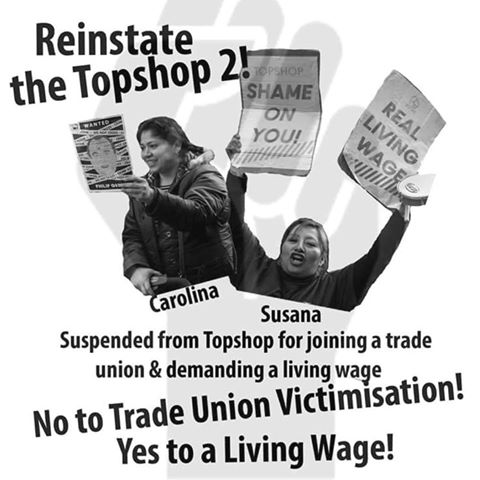 Protest to Reinstate the “Topshop 2” and demand the Living Wage

Following the launch of our living wage campaign at Topshop in February 2016, the cleaners have been systematically victimised, bullied and threatened by the cleaning company Britannia. Topshop have been fully informed but they are refusing to intervene thus allowing their contractor to unlawfully victimise the cleaners.

We wil be returning to Topshop for the second time in a month to demand a real lving wage of £9.40, and not the government’s fake living wage of £7.20, and to demand the reinstatement of the Topshop 2.

The retail sector has always been an abusive and low paying sector and the reason is because of unsrupulous employers like Topshop which is owned by the billionaire-parasite Philip Green. We cannot adn will not let them get away with this.