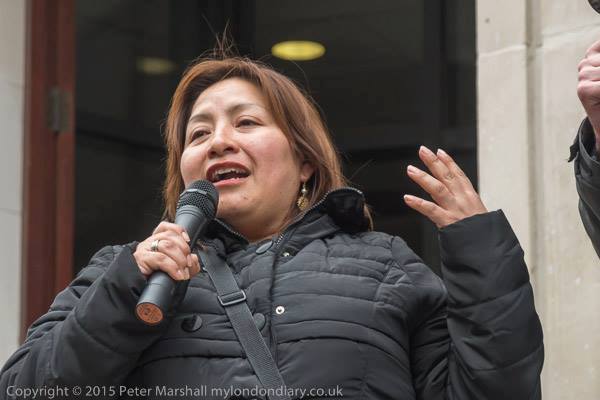 Susana (one of the ‘Topshop 2’) disciplined for supporting a campaign

Susana, one of the ‘Topshop 2’, has ben further disciplined for supporting the SOAS Justice for Cleaners campaign.

As you know Susana has already been suspended from Topshop for merely being an active and effective trade unionist and protesting her poverty wages, and has recently been signed off work by her GP due to depression and anxiety brought about by being bullied, harassed, ostracised, shouted at, slandered and victimised by the cleaning contractor Britannia.

Meanwhile, Topshop, who also ordered Susana’s removal from site, and have full knowledge of the way in which she is suffering and being victimised is sitting back and allowing it to happen in violation of its own Duty of Care and Code of Conduct.

The latest attack on Susana has been carried out by David Shaw, the founder and Managing Director of Britannia who has just sent her a picture of herself taken by Peter Marshall, giving a speech in solidarity with SOAS Justice For Cleaners Soas Cleaners campaign on Monday 18th April and telling her that she will be further disciplined for having been there.

So now Susana is being surveilled by Britannia, and apparently by David Shaw himself, and is not only being victimised for protesting and standing up to injustice at her own place of work, but is also been victimised for supporting other workers who are fighting injustice too.

PLEASE HELP BY WRITING TO:

1) David Shaw – DShaw@britanniagroup.co.uk – and tell him to:
i) leave Susana alone; ii) top victimising and slandering her; iii) apologise to her; iv) reinstate her and; iv) respect the right to protest.

2) Paul Forrest, the Arcadia Group Employment Relations manager – Paul.Forrest@arcadiagroup.co.uk – and tell him to i) employ an ethical contractor that respects trade union and human rights and ii) stop pretending that the cleaners are not Topshop’s responsibility.

Please also forward or ‘cc’ your e-mails to: petros@uvwunion.org.uk so we can keep a record of them. Many thanks and solidarity forever.