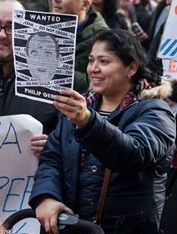 Carolina, one of the “Topshop Two”, has been sacked

BREAKING NEWS: Carolina (see picture), one of the “Topshop Two”, who is a single mother from Ecuador, has just been SACKED by Topshop’s union busting contractor Britannia Services Group. Her only crime was to join a union and protest her poverty wages.

In other words as Philip Green buys another £100 million yacht, one of his cleaners is sacked for asking for a living wage of £9.40 per hour.

Carolina and her colleague Susana, who together make up the Topshop Two, were both previously suspended. Susana remains suspended.

The disciplinary hearing which led to Carolina’s dismissal was held in her absence, without her consent or knowledge, as she was on sick leave suffering from depression and anxiety.

The allegations against Carolina, on which her dismissal was justified, relate to unspecified conduct and behaviour issues (as is always the case when a company victimises someone) for which not a single piece of evidence was or has been presented to her. In fact, Carolina still does not know what it is she has meant to have done!

We will of course take Brtitannia and Topshop to Tribunal over this but in the meantime please HELP by writing to:

1) David Shaw, the Managing Director of Britannia- DShaw@britanniagroup.co.uk – and tell him to:
i) stop victimising and slandering Susana and Carolina and bullying and intimidating their colleagues; ii) apologise and reinstate them, and respect the right to protest.

2) Paul Forrest, the Arcadia Group Employment Relations manager – Paul.Forrest@arcadiagroup.co.uk – and tell him to: i) employ an ethical contractor that respects trade union and human rights and; ii) stop pretending that the cleaners are not Topshop’s responsibility.