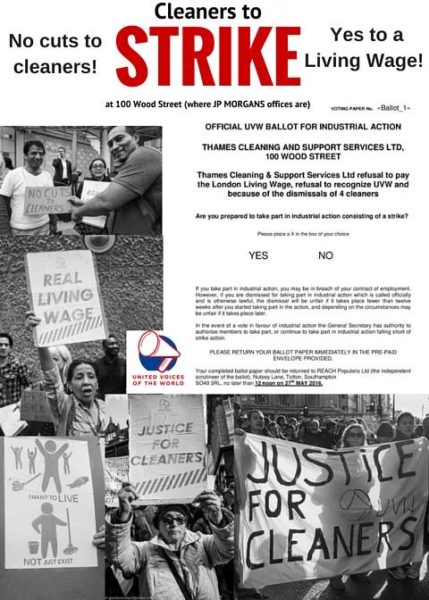 Cleaners being balloted for strike action over job cuts and the London Living Wage at 100 Wood Street, where global financial giants such as JP Morgan and Schroders have their offices, have been threatened with an injunction unless they promise to turn away solidarity on their picket line.

Thames Cleaning and Support Services Ltd, the cleaning contractor at 100 Wood Street, was awarded the contract 6 weeks ago and is now, according to their union UVW, unlawfully sacking, without justification and in contravention of TUPE regulations, more than half the cleaners, and refusing to pay the London Living Wage, which is currently £9.40 per hour.

The cleaners, some of whom have been working there for up to 15 years, decided to take strike action following Thames Cleaning’s refusal to engage with their union UVW and even accelerate the redundancy proceedings.

The ballot will run between 19th – 27th May and what is looking likely to be an all out strike will start the following week.

On receiving notice of the ballot Thames Cleaning hired the law firm Clarkson Wright & Jakes Ltd to threaten UVW with an injunction in relation to proposed industrial action and protest action on grounds of alleged non-compliance with the burdensome statutory procedures.

Realising UVW had, in fact, being fully compliant Thames Cleaning quickly turned to threatening to seek an injunction if, by the close of business today, Wednesday 28th May, UVW did not agree to provide an undertaking to restrict the picket solely to the workers on strike plus one trade union official.

The cleaners, therefore, have essentially been given an ultimatum to either actively turn away solidarity from the public that they might receive on their picket line or risk an injunction which, if successful, might render the picket unlawful.

Petros Elia, UVW’s General Secretary, says, “trying to make our members choose between a small lawful picket and a large unlawful picket is completely unacceptable. It is not for the employer to decide the size of a picket and it’s a damning indictment of the growing arrogance and ruthlessness of employers, especially in the cleaning sector. It’s outrageous that an injunction is even being contemplated against a small group of low paid workers who have decided that to withdraw their labour is the only means in order to save their jobs and win them a wage they can live on, especially when they clean the building in which JP Morgan is a tenant. UVW members will not be bullied out of their human rights, and will not be bullied out of the fight for justice. The strike will go on.”

One of the cleaners says, “I feel like they are stepping on and completely disregarding my rights. How can we be dismissed without any consideration. Where are my rights?”

Another cleaner says, “I really feel oppressed by Thames Cleaning and by these unjust dismissals. We all deserve a dignified job and a dignifed wage and we want these cuts to end and our dismissed colleagues to be reinstated.”

Please get in touch for further info.

You can donate to the strike fund at: www.uvwunion.org.uk/volunteer/