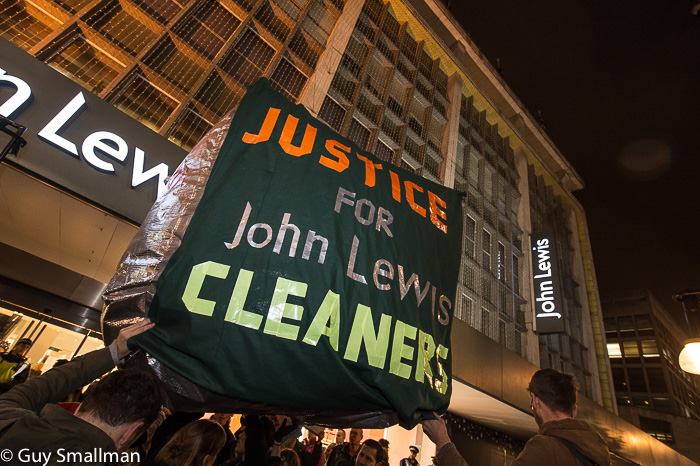 Following John Lewis’s refusal to pay the cleaner’s a living wage and bring them in to the partnership, we held a mass demonstration on 5th November supported by UVW’s wider membership consisting mainly of migrant cleaners, and other groups and organisations.

This protest marked a clear statement of intent to embark on a sustained and robust campaign for Justice for John Lewis Cleaners. The dignity and respect of the John Lewis cleaners is non-negotiable and we will never give up this fight.

John Lewis makes well over £100 million in profit a year despite a recent slump, and pays its Chariman over 114 times what the cleaners earn. There is no excuse to exclude them form the partnership and give them worse pay and terms and conditions that any other John Lewis member of staff (“partner”).

Worse still is that the annual bonus enjoyed by John Lewis “partners” is publicly announced every year in store. This means the cleaners are forced to watch everyone celebrate and then sweep up the confetti and mop up the spilt champagne as a cruel reminder of their second class status within John Lewis.

Please contact Peter Marshall, Guy Smallmanand Natasha Quarmby from Fields of light photography for any commercial use of the photos in this album which carry their watermarks.