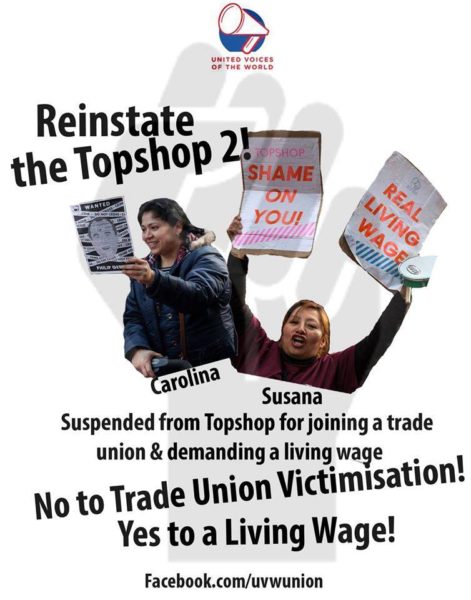 UVW goes to employment tribunal to defend the Topshop Two

Last year they were cruelly sacked by the cleaning contractor Britannia Services Group with Topshop’s consent or even at Topshop’s behest, for having boldly organised themselves and their colleagues into our union United Voices of the World and campaigned for a living wage.

One of the Topshop Two, Carolina, has her 5 day Employment Tribunal hearing starting next Thursday 6th April and finishing the following Wednesday 12th April. A declaration from the tribunal that she was dismissed for her membership of UVW and participation in the campaign for a living wage will be a victory for all workers out there who are fighting for dignity, respect and a living wage. Stay tuned for updates.

The date of the hearing of the other member of the Topshop Two, Susana, is still to be confirmed.