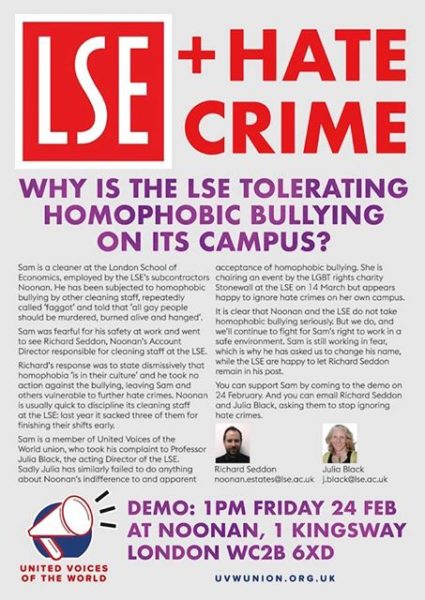 UVW secures the removal of Noonan’s cleaner account director at the LSE University following his inaction in the face of homophobic harassment!

You may remember the case of a member of UVW, Sam (pseudonym), who works as a cleaner at the LSE University. He was subjected to hideous homophobic hate crimes by several people over many months. He reported the abuse he was suffering to the cleaning company Noonan’s account director, Ricahrd Seddon, who chose not to suspend the accused whilst an investigation took place or even investigate the matter at all.

Instead he responded dismissively saying, in reference to the country of origin of the accused that, “it’s in their culture.”

UVW takes a zero tolerance policy towards homophobia or any form of discrimination and we demanded justice and accountability with the support of the Justice for LSE Cleaners campaign through petitions, pickets and protests. Here’s a video of one of those actions –

It has now come to our attention that our efforts have paid off and Richard Seddon has finally been removed from the LSE contract.

In the meantime we are taking Noonan to an Employment Tribunal in which we expect a declaration to be made that Noonan have victimised, harassed and discriminated against Sam for being gay.

In light of this case and other matters the LSE should seriously consider its relationship with Noonan.