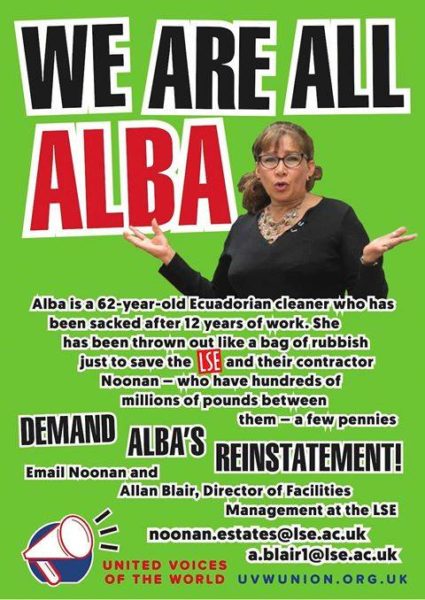 LSE CLEANERS TO STRIKE FOR 72 HOURS DURING STUDENTS GRADUATION

After the LSE cleaners recent historic victory which resulted in them being brought in-house after 7 days of strike action and the largest cleaners strike in UK history, the cleaners will be back out on strike for 3 more days during the LSE students graduation over one remaining issue of dispute: Alba Pasmino.

Alba dedicated 12 years of her life to the LSE and was one of the longest serving members of the cleaning team. She was an experienced worker and a loved and important member of the team and the wider LSE community.

However, she has been unnecessarily, unfairly and unalwfully sacked by the LSE’s contractor Noonan. She is taking them to an employment tribunal but the outcome of that hearing in July will not guarnatee her reinstatement even if the judge accepts that she was unlawfully dismissed.

Why was she officially sacked?

The official reason given for sacking Alba was that “following a review of the Supervisor structure at the LSE, the nature of the contract, and taking into account how we can best deliver an efficient service to our client and the public…we propose the loss of 5 current supervisor roles at the LSE”.

That explanation is vacuous. In reality, there was no justiifed reason to make those redundancies and the only reason was to save a few pennies off her back. This is all the more shameful not only becasue the LSE and Noonan have a combined annual income of around £500 million and Alba only worked 2.5 hours (£20) a day, but also becasue she is 63 years and is therfore only two years away from retirement.

Furthermore, there used to be 25 supervisors, which was cut to 18 and then again to 13 which has left those that remain to be severley overworked which is causing them, in some cases, considerable psychological and physical distress.

Alba’s reinstatement would therfore be a great relief to the team. This fact is recognised by Noonan’s newly appointed Account Director who is keen to see Alba return, but his efforts to bring that about are being blocked, without justifcation, by the chest-beating director of LSE Faciltiies, Allan Blair, who is callously using Alba as a political football which is creully at the expense of her livlihood and well-being.

Reinstating Alba is the right thing to do, the fair thing to do. It would also finally bring an end to the current cleaners’ dispute and ensure the studnets’ graduation cermonies may proceed without disturbance from the strikes.