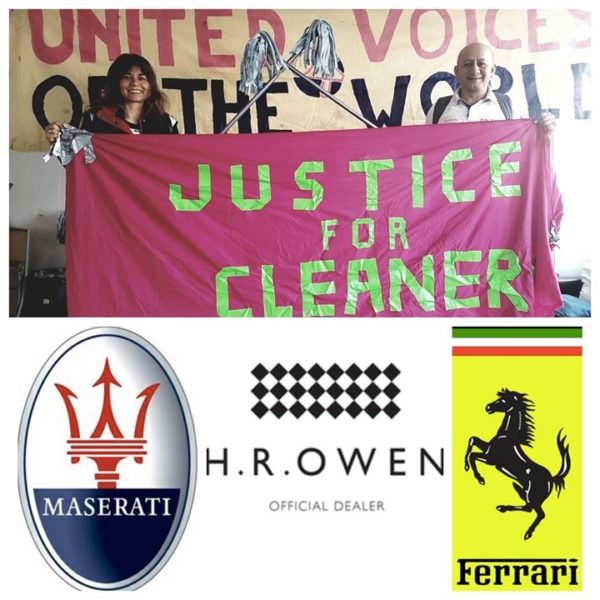 CLEANERS TO STRIKE FOR A LIVING WAGE AT FERRARI

Say hello to Freddy and Angelica, the inspiring husband and wife duo from Ecuador who, for the last 5 years, have been cleaning and polishing the Ferrari and Maserati dealerships in South Kensington run by H.R. Owen – Britain’s leading luxury motor dealer, and the world’s largest retailer in Rolls-Royce, Bentley, Lamborghini and Bugatti.

Despite a turnover of around £400 million HR Owen chooses to outsource the cleaners to a company call Templewood where they are condemned, like millions of other workers, to the indignity and impoverishment of the minimum wage.

Furthermore, the cleaners have for years been systematically underpaid even the miserable wages they were owed which has led to legal proceedings being instigated against Templewood and HR Owen for unlawful deductions from wages and breach of minimum wage legislation.

Having finally decided enough was enough the cleaners joined UVW and asked for a wage increase from £7.50 per hour to the London Living Wage of £9.75 per hour. However, both Templewood and HR Owen have denied responsibility for setting the cleaners’ rate of pay. This is a common occurrence in the world of outsourcing where the Bermuda-like-triangle between the worker the client and the contractor swallows both employer’s responsibilities and workers’ rights.

Unwilling to entertain Templewood and HR Owen’s excuses or endure the indignity of the minimum wage for any longer, Freddy and Angelica asked UVW to ballot them for strike action.

Following a Yes vote an indefinite strike is expected to commence on 9th October.

Unlike at the LSE University where UVW recently organised over 70 cleaners to walk out on strike, making it then the largest cleaners’ strike in UK history, Freddy and Angelica work alone at HR Owen’s Ferrari and Maserati dealerships.

There being only two of them would lead many people to argue that there was nothing they could do about their situation, that the company will never listen or concede to them, especially as they are non-English speaking migrant cleaners.

Well, at UVW we don’t care if you have one colleague or a 100 colleagues. If you’re on the minimum wage or suffer from any other form of injustice and are fed up and up for a fight we’ll ballot and back you all the way.

Furthermore, when Freddy and Angelica win they will lift hundreds of other outsourced workers at HR Owen off the minimum wage and out of in-work poverty.

To support Freddy and Angelica please make a donation to their strike fund if you can – https://www.uvwunion.org.uk/hr-owen/