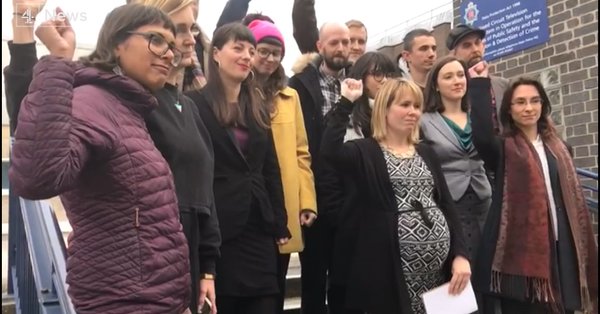 UVW stands in Solidarity with the Stansted 15

We at UVW are deeply shocked and concerned to hear about today’s guilty verdict of the “Stansted 15”, who bravely stopped a secretive charter flight scheduled for Ghana, Nigeria and Sierra Leone on 28th March 2017. The government’s punitive, racist asylum and deportation policies, aimed at criminalising the very act of migration, have devastating and long-lasting consequences for those seeking refuge. These secretive charter flights are pre-booked and later filled by the Home Office, creating a demand for migrant bodies to be removed irrespective of their current immigration status. The peaceful action of the #Stansted15 saved lives and resulted in 11 people out of the 60 who were on the plane to have been granted legal status in the UK.

As a trade union representing a majority of migrant workers, we see time and time again how abusive labour practices, coupled with violent border controls and hostile media narratives against migrants, create a state of fear. Restrictive immigration policies, workplace raids & surveillance, the threat of detention and deportation, reinforce and encourage employment practices that push migrant workers into exploitation, making them more exploitable as a culture of cruelty, impunity and de-unionisation becomes normalised. We continue to organise and fight for the rights of migrant workers in this country, demand an end to charter flights and condemn the clear abuse of power by the CPS for employing the unprecedented use of terror law to crack down on peaceful protest. We urge every trade union to take a stand and show support with #Stansted15. Full solidarity, rage and love!

Two things you can do: