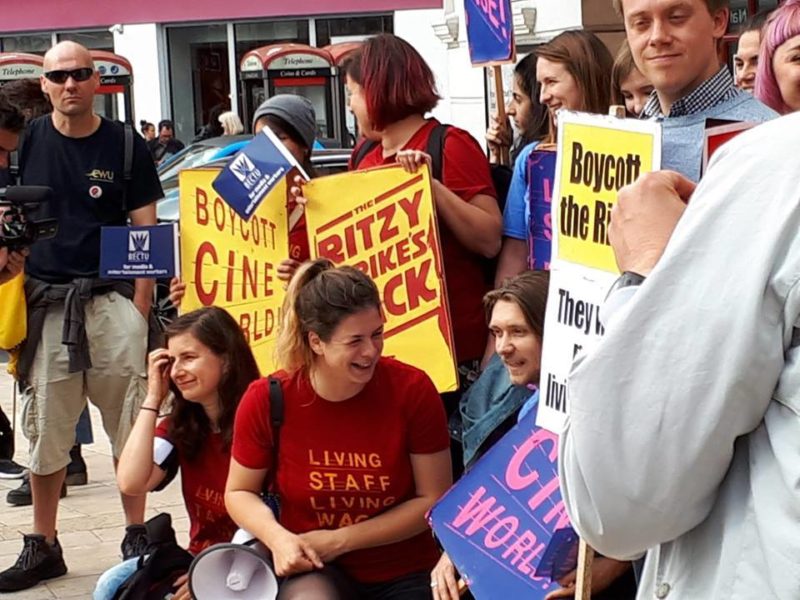 The former Ritzy worker was ruled to have been unfairly dismissed, with Picturehouse breaching her trade union rights and also her human right to assemble freely

Kelly Rogers, UVW member, former Ritzy worker and lead organiser of the Living Wage strikes at the Ritzy and Picturehouse, has been found by an employment tribunal to have been unlawfully dismissed for her trade union activities and in breach of her right to Freedom of Assembly under Art. 11 of the European Convention on Human Rights!

Her representative, UVW lay rep Richard O’Keeffe, successfully argued against Picturehouse’s Counsel, Thomas Croxford QC of Blackstone Chambers (instructed by Mishcon de Reya), that cyber-picketing (or “cyber-attacking” as dramatically dubbed by Picturehouse) and the promoting of it / refusal to report it to management, were all legitimate trade union activities that warranted protection under s.152 TULR(C)A 1992, regardless of whether it may have amounted to “unlawful means conspiracy” as suggested by Picturehouse.

In response to the victory, Kelly says: “Our strike against Picturehouse cinemas was for the most basic demands: a wage good enough to live on, decent sick pay and adequate parental leave. This ruling, which shows how I was sacked for undertaking trade union activities, points to the fact that my dismissal was a cynical attempt by Picturehouse to end our dispute and intimidate union members into not standing up for themselves.

“I am incredibly grateful to United Voices of the World union for supporting me in my case, when the odds seemed stacked against me – as they so often are for low-paid, precarious workers. We must keep fighting, keep striking for better pay and conditions and for dignity at work, whatever the odds.”

The tribunal noted that whilst cyber-picketing was “novel” and “not an activity that could be described as traditional trade union activity … it might be said that the activity was a response to the technological advances in the way that tickets are sold.” And in any event, the effects of cyber-picketing were hard to distinguish, if distinguishable at all, from a traditional picket, principally in respect of blocking the sales of tickets both on the day of the strike and on future days.

The tribunal also rejected the view that Kelly was obliged to disclose the names of fellow trade union members who might also have been promoting cyber-picketing, noting that it was “unreasonable” and “oppressive” to expect her to do so because union meeting discussions are confidential, regardless of whether they relate to potentially unlawful conduct, which in any event “was not self-evident” in this case.

In respect of the issue of confidentiality the tribunal further noted: “It seemed to us that it cannot be the case that the expectation of confidentiality is lost merely because matters are discussed at a trade union meeting that might not be approved of by the employer, or even, as in this case, the union itself. We accept that there will be limits to this proposition, if for example there is clear evidence of a conspiracy to commit a criminal act. But we did not think that threshold was crossed in this case.”

In fact, as argued by Richard O’keeffe, the tribunal found that Picturehouse’s oppressive expectation for Kelly to break confidentiality of her union meetings amounted to a fundamental breach of her right to Freedom of Association under Art. 11 of the European Convention of Human Rights.

This case follows that of Susana Benavides, UVW member and organiser, who was also recently found to have been unlawfully sacked for her trade union activities in organising her colleagues towards a strike for a living wage at Topshop’s flagship store in Oxford Street.

These two cases demonstrate that it is possible to get justice at tribunal, but also show that the law is miserably failing to deter employers from breaching their employees’ trade union and human rights in the first place.

The union movement therefore needs to fight to compel the government to start slapping big fines on employers found to have sacked their employees for their union activities, including a personal fine on the dismissing and appeal officer. There should be much higher minimum levels of compensation for workers, guaranteed reinstatement if the worker wants it, and the naming and shaming of companies in much the same way the government already does with those who fail to pay minimum wage.