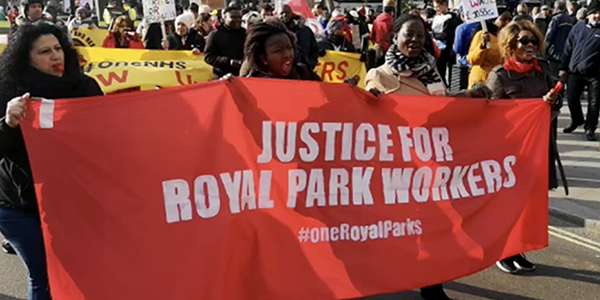 Around twenty of London’s Royal Park attendants who are outsourced to a French multinational company VINCI appeared in court this week for the first stage of their legal claim alleging that they have been unlawfully denied their full entitlement to 28 days annual leave per year.

The workers have 150 years service between them and some of them have been working for over 20 years whilst only been permitted to take 8 days instead of the legal minimum of 28 days for full time workers. Other park attendants were permitted their full entitlement but were only paid at their contractual rate of pay rather than their actual rate of pay which is unlawful. The claim is based on entitlements found in the Working Times Regulations 1998.

Members at Royal Parks are migrant, majority BAME workers and are also involved in UVW’s legal case against outsourcing. The case will also begin proceedings this month, and argues that the inferior pay and terms and conditions for outsourced black and minority ethnic workers amounts to indirect race discrimination in breach of the Equality Act 2010.

One Royal Parks attendant said, “VINCI are a thieving company, any way they can they will find a way to steal from the little people. Whether it is annual leave, or your wages, you always seem to be missing money somewhere or another. We hope this legal case will show everyone what VINCI is really like, and get us the money we are owed.”

Richard O’Keeffe, Head of Legal Services at United Voices of the World (UVW) said, “It is not in dispute that Vinci have denied our members their full annual leave entitlement and have dramatically underpaid them whenever they did take leave over many years. We urge Vinci to pay our members what they are owed instead of paying expensive lawyers to take procedural points and generate delay as they have over the past six months. These are issues regarding terms and conditions over which our members have not ruled out industrial action.”

United Voices of the World intends to take legal action against the Royal Parks at an Employment Tribunal. The case will argue that outsourcing BAME and other workers with protected characteristics onto inferior pay and terms and conditions of employment amounts to indirect racial discrimination under the Equality Act 2010. The case is a landmark legal case and has the potential to benefit the UK’s 3.3 million outsourced workers. The union is also in the process of bringing the same case against the Ministry of Justice and several other employers.