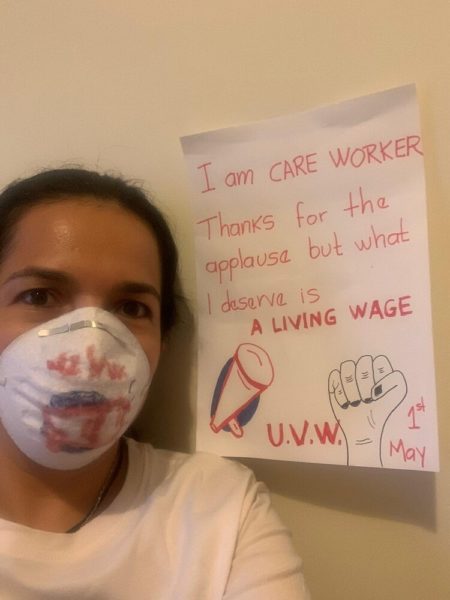 Carers and cleaners at a nursing home in Golders Green say clapping is not enough and neither is the £8.72 and £9.10 per hour they receive. The workers at Service to the Aged (SAGE), the majority long-serving and migrants, have today demanded that bosses negotiate with their union, United Voices of the World (UVW), and have filed an application for statutory recognition with the Central Arbitration Committee, (CAC).

This comes at a time when carers nationwide, like nurses, have been excluded from the recent public sector pay rise, and  their poor treatment has been publicly exposed following the high profile sacking of Nadia Whitmore MP who was given the boot for raising concerns about PPE, after she returned to work as a carer to help out in the Pandemic.

The application to the CAC comes almost 2 weeks to the day after Adrian Jacobs, member of the board at Sage, rejected a voluntary recognition deal, without providing reasons.

One carer, who prefers to remain anonymous in case they are penalised said, “I worked through Covid. I didn’t go into isolation. I worked night and day. What do I get?! A ‘Thank you for your hard’ work. This doesn’t pay for bread. I don’t feel I am worth anything, just an object. It’s time to make a stand”

“Sage need to wake up. There’s a reason why the majority of committed, loyal dedicated carers and domestics have joined us, they have had enough, and they are willing to go all the way, they know they will have the full backing of UVW and the whole country”, commented Molly de Dios Fisher, UVW organiser.

She continued “At the end of the day what they are calling for is only fair, quality care deserves quality pay, we strongly advise Sage to voluntarily recognise UVW, get around the negotiating table and give these workers what’s fair.”

Given UVW’s majority membership at Sage it is expected that the CAC will promptly make a declaration for recognition, which would be UVW’s 3rd recognition deal and the first in the care sector. Whilst the workers would use the benefits that come with such a deal, we will not be constrained by it, and we will, as our history shows, take any action necessary to win dignity and respect.

Get ready to stand with UVW care home members – share this story.