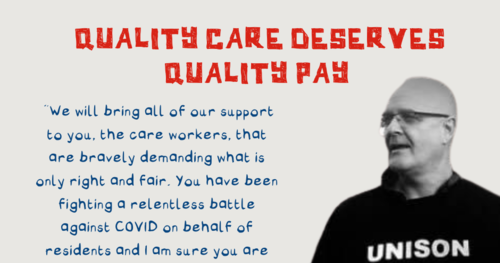 United Voices of the World members working as carers and cleaners at Sage nursing home in North London are engaged in a tense battle with management for union recognition and an end to poverty wages and Dickensian terms and conditions of employment. And with the launch last week of a speaking tour entitled, “Quality care, deserves quality pay”, solidarity is now on the rise with Barnet UNISON being the first fellow trade union to formally endorse the workers’ demands and offer their support.

Speaking just after the workers publicly announced their intention to ballot for strike action after Sage Trustee and billionaire landlord, Benzion Freshwater, refused, yet again, to recognise UVW and enter into negotiations with the workers over their demands for £12 per hour in line with NHS pay, John Burgess, Branch Secretary of Barnet UNISON, offered the following words of solidarity:

“We will bring all of our support to the care workers who are bravely demanding what is only right and fair. They have been fighting a relentless battle against COVID on behalf of their residents and I am sure they are more than able to deliver a decisive strike ballot for strike action if SAGE refuse to do the right thing.”

The increasingly public nature of the dispute has seen the Sage workers inundated with support from fellow trade unionists, activists and campaigners who are rallying to the workers’ cry for parity in pay and terms and conditions with NHS staff.

Commenting on the continued intransigence of the Sage Trustees, UVW organiser, Molly de Dios Fisher said the following: “Benzion Freshwater and his board of trustees are hopelessly out of touch. This is a board of billionaires refusing to recognise and negotiate with key workers who have kept Sage running throughout the pandemic. Their hard work and simple request for equality and dignity in the workplace has been met with the veiled threat of redundancies and the closure of the entire home, a classic union busting trick. These workers deserve so much more than the woefully inadequate extra 4 days of annual leave – after four years of service – that the board is currently offering”.

She went on to say, “to offer these workers a mere 3 weeks sick pay at half pay and a pay increase of zero is simply adding insult to injury. If the board believes it can get away with refusing to recognise the value of these workers it is sorely mistaken. Their threats haven’t broken the workers’ resolve, it has merely strengthened it. They will be pressing ahead with the strike ballot”.

Also commenting on the ‘offer’ was Estrella, a Sage care worker with 15 years of service, who said the following, “The offer is rubbish, if they think we will settle for crumbs they are wrong, we are united and strong”.

Julia, another Sage carer, with 6 years of service, said the following when speaking about the dispute to fellow care workers, trade unionists, and Real Living Wage campaigners at Tynedale Transformed: “We are living in an upside-down world, the rich are getting richer and the people that are keeping society running, that are caring for people, keeping them safe, fed, warm and healthy are getting poorer.  We need justice and dignity. Dignity means living with a decent salary”.