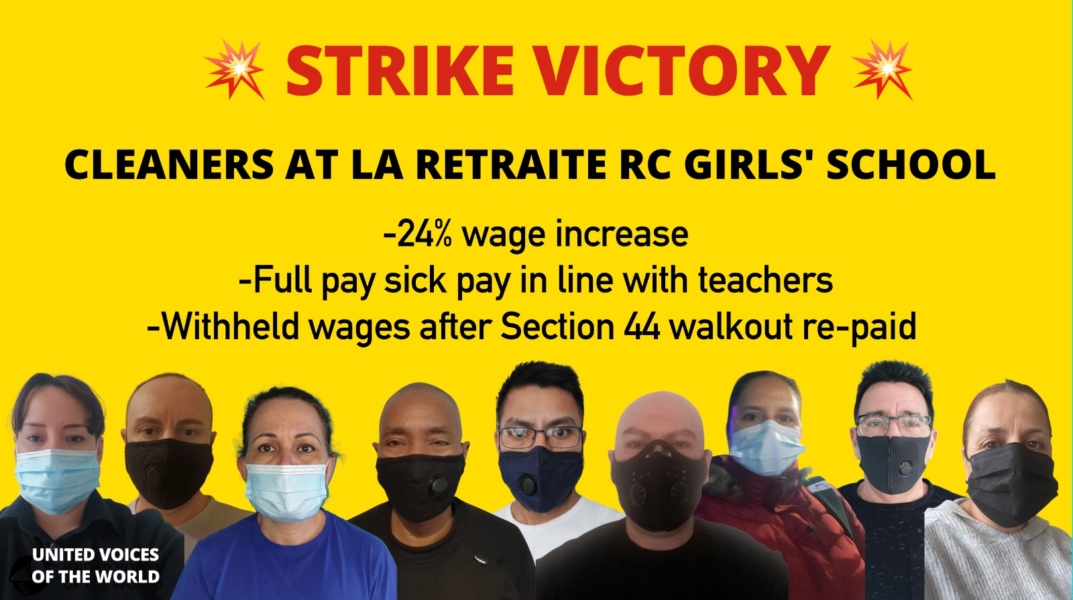 Cleaners at the prestigious South London based La Retraite Roman Catholic Girls’ School are celebrating today what their trade union has described as a “historic victory” after winning full pay sick pay equal to what teachers get.

According to the workers’ trade union, United Voices of the World (UVW), the victory comes after several days of strike action which was part of a planned 40-day strike which would have been “the longest school cleaners strike in UK history”.

The dispute erupted after the cleaners’ hours were cut in the run up to Christmas and their wages withheld after a month long walk out in February over Covid-19 health and safety concerns. Negotiations between the two sides broke down last week after the school rejected cleaners’ demands.

The threat of a 40-day strike was also accompanied by various separate legal claims, including the threat of a report to the Equality and Human Rights Commission. The claims related to  “institutional racism” in the Employment Tribunal over unequal terms and conditions between White and BAME workers, another was a Judicial Review in the High Court over the school’s decision to deny the cleaners equal sick pay and yet another was a claim in the county court and Employment Tribunal against the school’s contractor for “wage theft”.

UVW officials state the victory is their third in the school sector and the second time “outsourced cleaners have achieved total parity in sick pay with in-house teaching staff”. Officials also state the cleaners have won “a backdated London Living Wage”, “improvements to health and safety”, and the return of their “stolen wages”.

Speaking after the victory was announced Roberto Hernández Díaz, one of the striking workers, also said the following:

“I want to thank all the members of United Voices of the World for supporting us and helping us to win in our fight for the dignified payment and sick pay that all cleaners deserve. We joined UVW to fight for our rights, thanks to them we have now managed to be treated like the rest of the staff at school. We should never have had to fight for equality, but we were no longer going to allow ourselves to be treated like the dirt we clean. I feel incredibly proud to belong to this union”.

“After struggling for so long against La Retraite and Ecocleen for something as basic as a living wage and sick pay, I feel relieved that justice and common sense finally won. I am incredibly grateful to United Voices of the World and to all those who supported our struggle”.

Petros Elia, UVW organiser and Executive Committee member says, “This victory is yet another testament to the power of strike action. If our members hadn’t been willing to strike they never would have won. I am in awe of their courage and determination and I hope other workers take inspiration from them and start to strike in their workplace too. Striking is the only thing that ever has or ever will allow workers to win the dignity, equality and receipt they deserve.”

The legal cases against La Retraite:

The legal case for “institutional racism” is part of a campaign of strategic litigation being undertaken by UVW against several employers which argues outsourcing BAME and/or migrant majority workforces onto inferior T&Cs than their White in-house counterparts amounts to “indirect racial discrimination”.

The case against the schools contractor would have seen it taken to the Employment Tribunal on the grounds that the deduction of the workers’ wages in response to a Section 44 walkout was a detriment and in violation of the Employment Rights Act 1996. 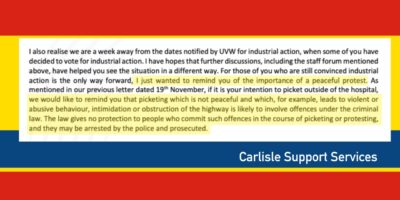