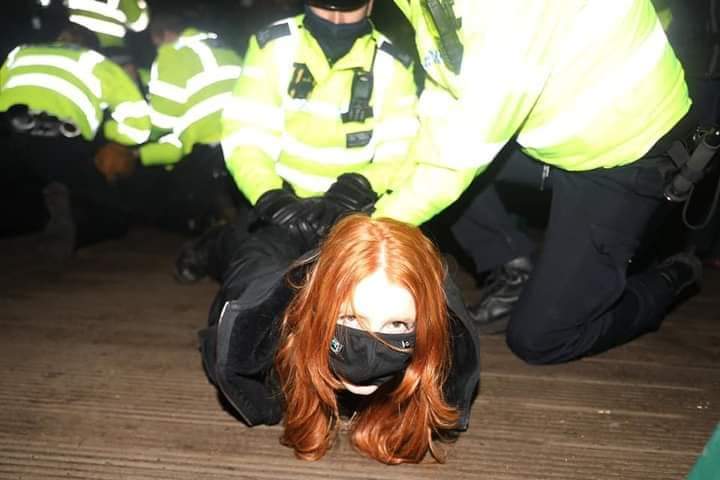 We will not be silenced

United Voices of the World (UVW) condemns in the strongest possible terms the police violence meted out to women attending the vigil for Sarah Everard.

Yesterday women, non-binary people, children and families wearing masks, holding flowers, placards and lighting candles, gathered together in an outpouring of solidarity and collective grief and mourning to mark the life of Sarah Everard.

The vigil took place in Clapham Common park, near to where Sarah Everard was last seen before her alleged kidnap and murder by Metropolitan police officer Wayne Couzens

Several UVW members who witnessed and experienced the police aggression commented: “As dusk began to fall, the police began to circle and move in on us. It was clear they had been given orders to go in hard. The violence was shocking and disproportionate. We witnessed almost 20 police officers take away one woman. The police turned a beautiful and safe moment into a harrowing and traumatic scene”.

Petros Elia, UVW co-founder said “As a union co-founded by and led by majority grassroots women leaders and migrant, low paid and precarious workers, we fight for dignity, respect and equality every day. We build worker power in our workplaces and our communities. We do this by taking action in the streets and in the courts. The right to protest is a human right, our ability to organise without fear of harassment, surveillance and state violence is paramount. We are deeply concerned at the incoming Police, Crime, Sentencing and Courts Bill which promises to stifle dissent even further by making protest a punishable offence that could lead to a 10-year prison sentence. We call for this bill to be voted down and for additional and proper protections to be introduced instead which genuinely safeguard our rights as people, workers and trade unionists”