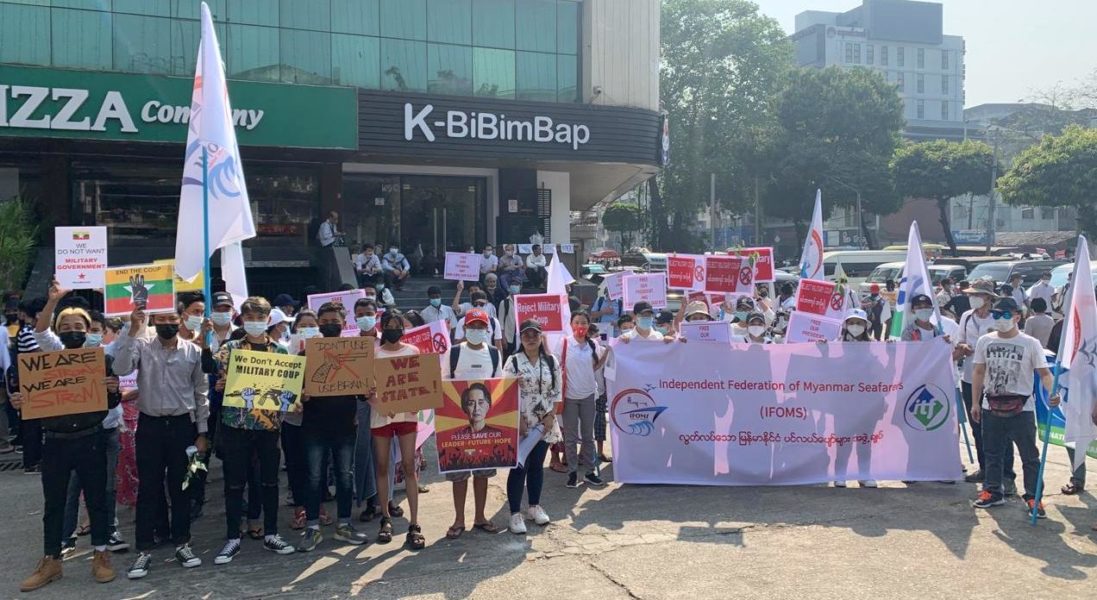 This week, on the 25th of May, UVW offered further solidarity to workers resisting the military coup in Myanmar at a solidarity meeting organised by comrades at Unite Branch LE1276 of the International Transport Workers Federation.

UVW forged a close relationship with the Independent Federation of Myanmar Seafarers (IFOMS) in 2019 after comrades spoke to UVW staff and members about their inspiring struggle and success in forming an  independent, grassroots and multi-ethnic trade union. Then, in April of this year, UVW responded to a call for international solidarity to support trade unionists organising the civil disobedience movement in Myanmar and raised a hardship fund of £5,317.

The solidarity meeting was addressed by Shwe Tun Aung, a founding member of IFOMS now living in exile in the US, and Wai Hnin Pwint Thon from Burma Campaign UK. Both panelists spoke of the horrors unfolding in Myanmar, but also of how workers, civilians and trade unionists – both inside and outside the country – are resisting the coup.

Addressing the meeting, Shwe said: “It [the military junta] is responsible for the brutal killings of more than 795 protestors and civilians, including children, and the arrest of almost 5000 people. The military junta has also illegally dismissed tens of thousands of workers, including 20,000 teachers, over 2000 train drivers, and 1000 nurses…in Burma right now, most of the union leaders have to hide, they have to run because they [the junta] come at night and they take you away, and if they get you, they call the family in the morning to collect the dead body”.

He went on to say: “For me I would like to ask you to contribute whatever you can, everything counts, even 5 dollars can go a long way…the people of Burma will resist this attack on their human rights and their freedom, we will support them in any and every way we can, we will support their right to live in peace, free from conflict and repression, we have to fight for future generations….please donate whatever you can to the brothers and sisters of Burma”.

Wai spoke of the multiple campaigns and actions Burma Campaign UK is currently engaged in. She said: “We need to hold these military generals to account for all the atrocities they have committed and not just only in the last 3 – 4  months, but in the past decades as well. As a society for us to move on and have a genuine democracy these people need to be held accountable for their crimes”.

She then went on to say: “On the humanitarian side, we have been helping activists to escape city areas and go to ethnic armed and controlled areas. We’ve also been helping growing numbers of internally displaced people in ethnic areas because now the rainy season is coming we are worried they have no shelters, food or other essentials”.

Petros Elia, UVW Co-Founder and Lead Organiser, made clear that UVW stood ready to offer further solidarity. He said “Every group of workers and every union needs solidarity, even at the best of times and when there’s relative peace and calm on an industrial level. But when there’s the types of atrocities and human rights abuses taking place and the obstacles facing trade unionists in Myanmar, including imprisonment and death, it makes our restrictions and obstacles to organising here pale in comparison”.

He then said, “we don’t face anywhere near the same types of abuses, obstacles and threat to life that people face in Myanmar and we very much want to continue to work with IFOMS and other trade unions in Myanmar. So if we can continue to do that through raising further strike funds then we will, and if we can carry out any direct actions here then we will ….we want to find a way to bring as much pressure to bear on this military government to help end their reign of terror”.

Find out how to donate to the IFOMS fund by emailing comms@uvwunion.org.uk