United Voices of the World (UVW) has responded to a call for evidence from the Joint Committee on Human Rights (JCHR) regarding the Police, Crime, Sentencing and Courts Bill (PCSC).

In its response, which was underpinned by a survey of UVW members, UVW stated the Bill would violate the rights of UVW members and workers to organise effectively and take collective action through a trade union, something UVW believes to be a right under Article 11 of the European Convention on Human Rights (ECHR).

UVW also pointed out that the wording of Part 3 of the Bill is wide reaching and would give the police new powers that it was clear they would abuse and puts racialised workers at greater risk of police victimisation.

In the response UVW also noted that 88% of surveyed members believed making noise on picket lines had been essential to the success of UVW’s campaigns, one respondent stated:

“Picketing a workplace is by nature loud and disruptive, “serious disruption to the activities of an organisation which are carried on in the vicinity” is precisely the point of such action and without this, there is no effective strike action”.

In its response to the call for evidence, USW pointed out that a recent amendment to the PCSC Bill, tabled by Labour MP Diana Johnson, would introduce the ‘Nordic Model’ into the UK, criminalising the clients and advertising spaces used by sex workers and as a result put sex workers a greater risk of violence. With one USW member stating:

“The Nordic Model reduces the number of our clients, which makes it more difficult to turn down those who make us feel unsafe. It also makes it more difficult to enforce. boundaries, such as condom usage. It makes us more likely to work in unsafe areas to escape law enforcement. And, statistically speaking, it makes us more likely to be murdered by our clients. This is also a labour rights issue. If our workspaces are criminalised, we cannot organise them. If we have to keep our profession hidden out of fear of legal repression, no collective action is possible to improve working conditions”.

Speaking after the submission of the call for evidence, Petros Elia, UVW Co-Founder, Executive Committee member and Organiser, said the following:

“We know based on past police interactions with our members, the majority of whom are migrants and Black or Brown, that the police will readily abuse these powers to prevent the lowest paid and most precarious of workers from winning essential improvements such as a Living Wage and full pay sick pay”.

“We are proud that so many UVW members responded to the call for evidence. We know that we have a fight on our hands to kill this bill, but we’ve seen courageous displays of direct action and resistance to police repression in the past few weeks, both in the UK and in Colombia and Palestine, but we know that collectively the people have the power to beat this bill”. 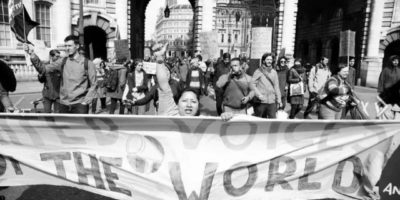