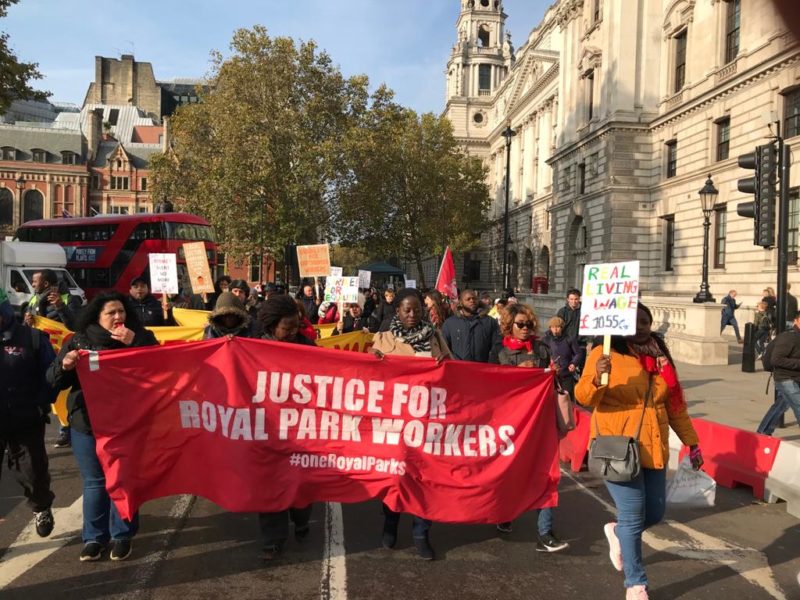 The Royal Parks, a charity set up by the government to administer some of Londn’s most iconic parks owned by the Queen, is set to find itself in the High Court says trade union United Voices of the World (UVW).

The legal claim comes after an outsourced member of cleaning staff at Regent’s Park, one of the 8 parks under the care of the charity, filed a claim in the High Court alleging the decision to contract with her employer on the basis that she would receive inferior terms and conditions to in-house staff was unlawful.

The Royal Parks are a public body who are subject to the Public Sector Equality Duty, so must have “due regard” to the need to eliminate discrimination and to advance equality of opportunity. Royal Parks admit that they had no regard to any equality implications arising from the disparity of terms between outsourced predominantly BAME staff, and overwhelmingly White in-house staff. The claimants’ case is that in these circumstances “due regard” cannot be “no regard”.

According to UVW officials, the claim, which they have described as “groundbreaking and potentially precedent setting”, will contend that The Royal Parks have failed to give “due regard to the discriminatory effect of operating a double standard on terms and conditions between directly employed and outsourced staff”.

The latest publicly available figures filed by the charity in November 2019 reveal the charity’s in-house staff was 87.7% white while over 90% of outsourced cleaning staff were said to be BAME. It is understood the claim will look at disparities between the two, with some of the notable disparities being the enhanced annual leave received by in-house workers as well as sick pay, maternity pay and employer pension contributions.

Officials claim that, when approached by the union and asked how the disadvantage faced by the predominantly Black, African and migrant outsourced workforce had been taken into account when the charity recently put its cleaning contract back out for tender, the charity responded  by saying “The Royal Parks assessed the associated Equality and Diversity impacts and concluded there were none”.

The outsourced worker bringing the claim is being represented by the Public Interest Law Centre (PILC).  PILC,  in partnership with UVW, has today launched a CrowdJustice appeal to protect the claimant from legal costs and to allow this ground-breaking litigation to continue.

Richard O’Keeffe, Head of Legal Services at UVW, said the following: “It is not uncommon for public sector bodies to be challenged by way of judicial review when they make unlawful decisions in respect of workers’ terms and conditions. The situation should be no different when they make unlawful decisions affecting the livelihoods of their outsourced workforces, cleaners, security guards and so on. No regard to equalities implications of public body decision making cannot be ‘due regard’.”

Saskia O’Hara, paralegal at PILC, states:  “The Royal Parks charity cannot go unchallenged when they shirk their responsibilities to eliminate discrimination whilst exercising their public function. PILC are proud to stand behind this brave migrant worker in her legitimate battle for equality and justice.”

You can support the legal claim by donating to the worker’s legal fund here.