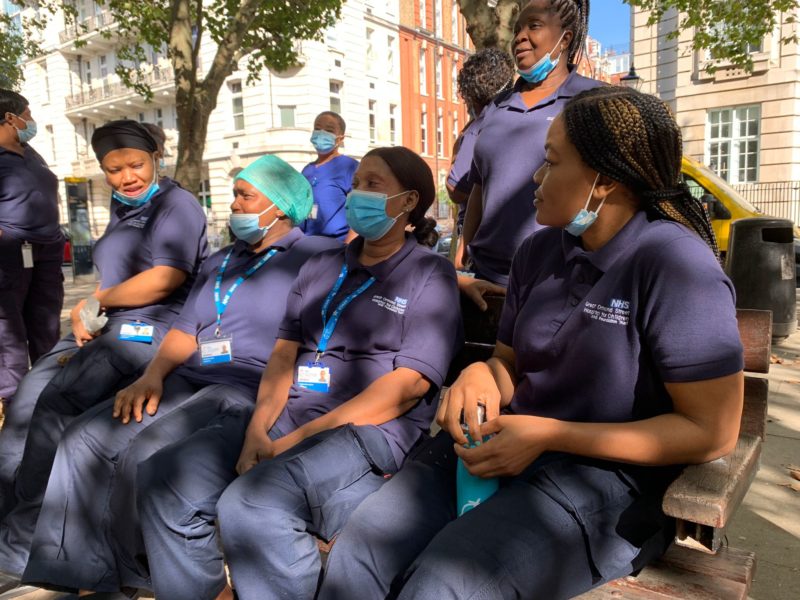 In the past few weeks, job shortages across different sectors have been dominating the headlines, as the UK suffers an historic dearth of workers. Domestic workers at UVW and beyond are feeling the impact of those severe staff shortages reported by cleaning companies after a year of closed city centres, laid-off workers, lost accounts and Brexit.

The UVW union carried out a survey asking members how they have been affected by increasing shortages. Over half said their conditions had taken a turn for the worse and that they were struggling to do the work being demanded of them.

“In my building, there are less cleaners and more work.” said one. “We need at least 6 people to cover everything in order to avoid getting complaints on a daily basis.” said another.

As the pandemic hit, the government pushed key workers to carry on working. In the past year, domestic workers have been on the front lines, keeping hospitals and office blocks safe and clean, yet they are among the country’s most invisible and underpaid.

UVW members say they are working longer hours, do more work in their existing shifts, for the same money as they were before. Only 15% have seen their wages go up. “They reduced my days but no one works on the other days, so it’s not fair. They haven’t given me more hours, they just gave me more work” said one member.

Despite working longer hours, just 2% of cleaners said they were being offered bonuses or any other special perks – many don’t even receive the minimum wage which is set at £8.91 an hour for over-23s and referred to as the national living wage by the government.

A big chunk of these workers are employed by private contractors who offer notoriously bad terms and conditions. Some of these cleaners list a litany of failings including failure to supply PPE; paying day rates for night shifts and forcing staff to travel hours to fill two-hour shifts.

The picture painted by UVW workers looks even bleaker when you consider the workplaces they clean: often in the city, often in banks that generate billions for a privileged few. In stark contrast, the UVW membership is made up of precarious workers, most from Black/Brown and migrant backgrounds. For anyone grappling to understand the meaning of structural racism, here is a concrete example.

“UVW members have cleaned banks, offices, government buildings, hospitals and schools throughout the pandemic. They are real Covid heroes that have kept the economy afloat. Paying workers who have risked so much whilst serving society, £9-10 an hour is shameful. Increasing their workload and still paying them a poverty wage is abhorrent” said Petros Elio, co-founder of UVW.

Elio added that the experiences of UVW members exposes the divisions in the work market. While many in highly skilled jobs may have accrued bargaining power with their bosses, the situation for cleaners has become increasingly difficult.

“Now more than ever our members demand and deserve dignity, respect and a real living wage. And we will scale up and strengthen our fight against the bosses until every last one is brought to heel and held to account,” he said.