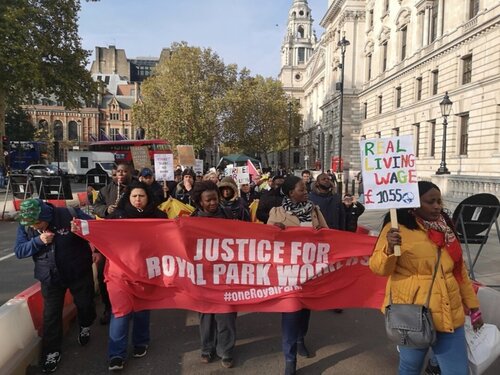 United Voices of the World (UVW) has won a historic group Employment Tribunal claim against the Royal Parks’ outsourcing of a group of largely Black, brown and migrant workers employed as park and toilet attendants, striking a blow against outsourcing and structural racism.

An Employment Tribunal has found that a decision by the Royal Parks not to pay the almost exclusively Black and brown outsourced workers the London Living Wage (LLW) from 2014-2019, amounted to indirect race discrimination. The decision to pay outsourced workers less money than in-house staff disadvantaged the predominantly Black cleaners.

Finnian Clarke, employment tribunal caseworker at UVW, said: “This case should encourage any UVW member who does work for/on the site of a client but is directly employed by a contractor, such as a cleaning or security company, to come forward and potentially bring a discrimination claim.”

In 2014, the Royal Parks were given the option of requiring that cleaners were paid the LLW, but chose not to, despite the fact that their own staff were paid at least that amount. The workers were directly employed by Vinci Construction (and now Just Ask Services). These cleaners work every day at the Royal Parks, whose own, majority white, in-house staff are paid the LLW and get much better terms and conditions.

Clarke added: “Many outsourced workers have before now been advised that they are unlikely to win their claims against bodies like the Royal Parks as they were not directly employed by them. This case confirms what we really knew all along: bodies that choose to outsource workers on lesser terms have the power to give them better conditions, they just choose not to do so because it’s cheaper. We hope that this case will allow many others to challenge the discriminatory and unjust practice of outsourcing.”

The Tribunal rejected the Royal Parks’ attempt to justify their practices on the basis of affordability, as they had failed to provide any evidence whatsoever that suggested that they could not afford to pay the workers the LLW. The outsourced staff were not paid the LLW until early 2020.

Commenting on the ruling, Petros Elia, general secretary for UVW, said: “Structurally racist outsourcing is rife in London where Black and brown workers are regularly hired on worse pay and conditions than in-house workers. UVW was started to help workers fight back against this practice and we’ve just beaten it at Royal Parks with industrial and legal action. This ruling, combined with organising in workplaces, could be the catalyst for a redistribution of wealth from wealthy employers to low paid Black and brown workers worth billions and that’s no exaggeration.”