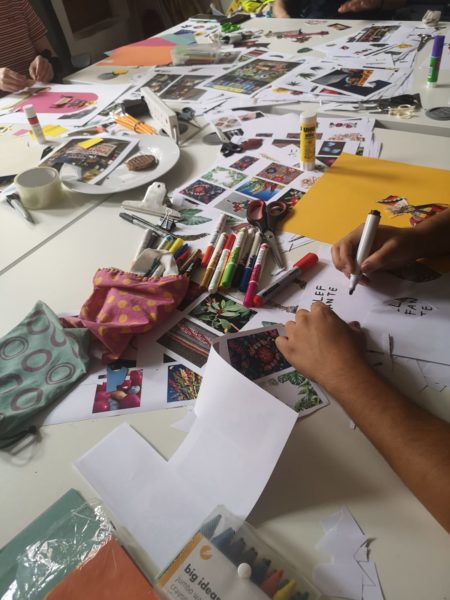 “It’s a way of insisting that the working class is also creative, and that creativity is expressed in creating new worlds where we all work in dignity and together.”

In collaboration with Latin Elephant and Gasworks, United Voices of the World (UVW) members Ángela (The Bonita Chola) and Nelly (blkmoodyboi) invited us to an art and memory workshop about the Elephant and Castle area, which was held at the UVW offices on 30 July. Our union played, and continues to play, a very important role in the Elephant and Castle area as the political epicentre for organising the working class within the Latin American community in London, and this workshop sought to honour that historical legacy.

“The intention of doing this workshop with our union is to insist on the fact that UVW has a role in Elephant and Castle and is part of the memory of struggle in the area; the memory of the struggle of the migrant working class. Elephant & Castle is not only an area of social and cultural enjoyment, but also a place of political organising,” says Angela, also known as The Bonita Chola, co-organiser of the workshop and member of UVW.

In the workshop we reflected on and remembered the impact of the Elephant and Castle area on the Latin American community; we shared our memories and thought about what the neighbourhood means to us now, following a process of redevelopment and gentrification. Elephant and Castle has been and is an area of utmost importance for our community: a space of cultural, political and communal enjoyment.

Nelly ‘blkmoodyboi’, workshop co-organiser and UVW member, highlighted the creative aspect of the workshop. “The working class is also creative,” says Nelly, “and that creativity is expressed in creating new worlds where we all work in dignity and together. Also, if arts organisations and institutions want to do work with and for racialised and migrant groups, it should be done in spaces where the working class of those groups are present. So that there is real participation.”

Thank you to everyone who took part in the workshop.

Angela and Nelly will be producing a series of graphic posters with the membership that they will be sharing with the UVW family.