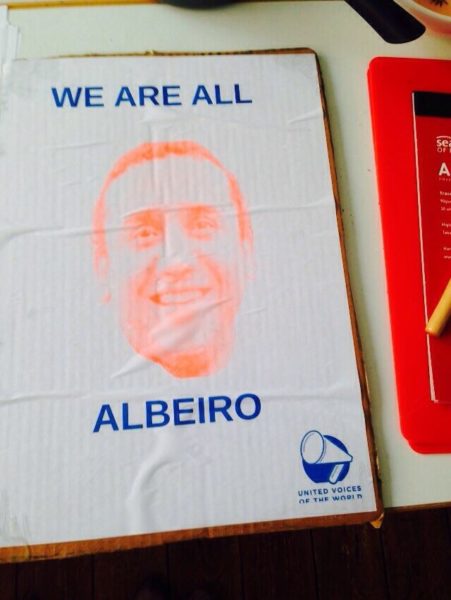 We are all Albeiro

This morning we are representing our trade union member, President of UVW, and employee of MITIE at the Barbican Centre. He has been accused of a litany of vexatious and malicious allegations following his involvement in a peaceful protest at the Barbican on Saturday 25th April.
Guess who is running the investigation meeting?: The same guy from Human Resources, Ben Myers, who unlawfully and disgracefully told the cleaners that if they protested they would be disciplined and dismissed. We have voiced our objections repeatedly to the Head of Employee Relations, Diana Gardner, and called for Ben’s dismissal. However, she has refused to take any form of disciplinary action against him or even remove him from investigating the cleaners who he has unlawfully threatened. In conclusion, it is clear that MITIE condones and supports managers that unlawfully threaten cleaners. Absolutely disgraceful!
We are all Albeiro! We will fight tirelessly though to reinstate him and we will win! Please get in touch to support us. We cannot allow companies to get away with their disgusting, union-busting, threatening behaviour!