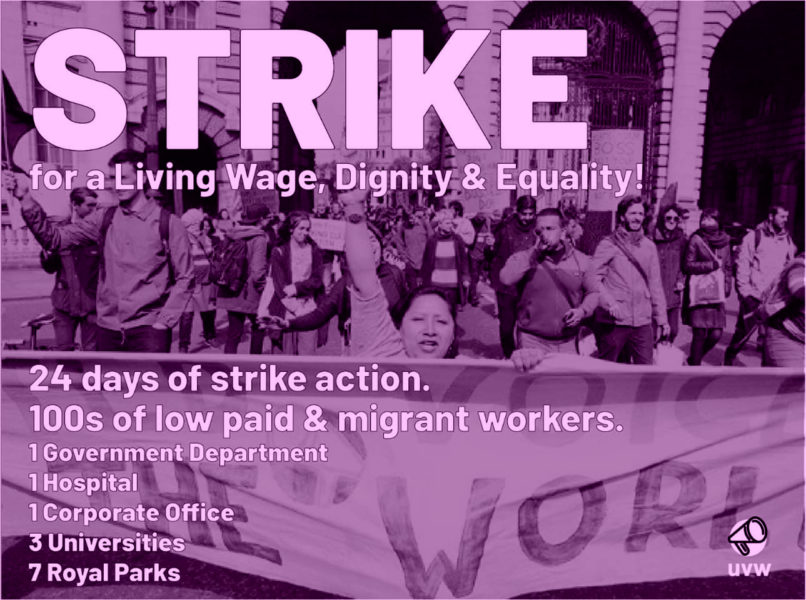 Hundreds of outsourced cleaners, porters and caterers to strike for equality with NHS staff at major London hospital

LONDON — Hundreds of migrant workers have voted overwhelmingly to take prolonged strike action at St. Mary’s Hospital in what promises to be one of the longest strikes in NHS history.

The workers will begin their strikes on 28th, 29th and 31st of October to demand equality in pay and working conditions with directly employed NHS staff. Their union United Voices of the World has publicly committed to successive weeks of strike action that will stretch well into December if the demands of its members remain unmet.

Outsourced by Imperial College Healthcare NHS Trust to French multinational Sodexo, the workers are paid an hourly rate of £8.21, and less for those under 25 years old — which is up to £10,000 less per year than staff of equivalent grade under the NHS Agenda for Change (AfC) pay scale.

The workers only have Statutory Sick Pay and cite this as forcing them to work on wards when ill — sometimes with contagious illnesses such as the flu — as they cannot afford to take time off when sick. The workers are also forced to change in mice-ridden, dimly lit and mixed-gender changing rooms located in the hospital’s basement. They are campaigning for better changing facilities as well as for an end to discrimination against outsourced staff that has seen Imperial ban them from eating in NHS canteens and resting in NHS staffrooms.

One striking cleaner said, “I work 55 hours a week just to cover my rent. St. Mary’s is my home, I spend more time here than in my house. Yet I am treated like a dog and made to feel like dirt”.

Co-founder of United Voices of the World and organiser of the strikes, Petros Elia, says, “In 2018 alone Sodexo turned a profit of 997 million euros. Sodexo’s contract with Imperial allowed its former CEO, Michel Landel to enjoy obscene executive pay totaling nearly a million pounds a year and annual bonuses of up to 200% of his salary. Sodexo and St Mary’s can afford to pay our workers in line with NHS rates and we urge them to do so — otherwise the strikes will continue indefinitely.”

Planned strike dates at St. Mary’s hospital are as follows:

The demands of the cleaners, caterers and porters are as follows:

St Mary’s workers will be joined by 6 other striking workplaces in what UVW has dubbed an “Autumn of Discontent”. This will include striking café workers from the University of Greenwich, security guards from St. George’s University, security guards from the University of East London, cleaners from London’s Royal Parks, the headquarters of ITV and Channel 4, and the Ministry of Justice (MoJ).