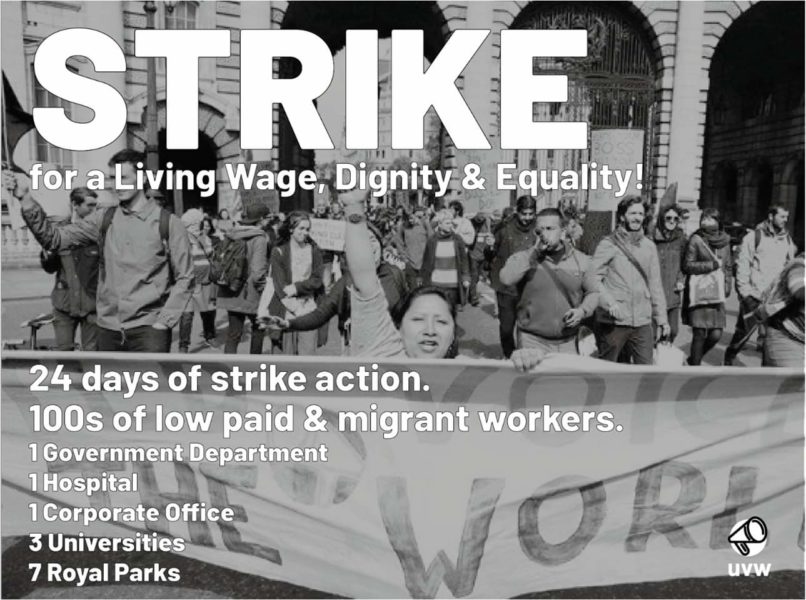 LONDON — This October, workers at the University of Greenwich’s café, who are outsourced to BaxterStorey, have voted unanimously to take repeat strike action, whilst two other University of London universities — St. George’s and the University of East London (UEL) — are also braced for similar action.

Organised by the trade union United Voices of the World (UVW), workers at the University of Greenwich will walk off the job demanding occupational sick pay in line with university staff and a reduction in their workloads.

Sydik, a chef at the University of Greenwich, said:

“I usually work non-stop, I don’t take breaks as otherwise I cannot keep up with the work. Last week I worked so hard without a proper break that I collapsed on the bus home and had to be hospitalised. I don’t get sick pay, so I cannot afford to be sick. Think about it — I am a chef who deals with food, but cannot afford to be sick. This puts not only mine, but everyone’s health at risk.”

Originally the workers were also demanding to be paid the London Living Wage, which on 15th of October the University conceded. Strikes are due to take place on the 24th, 28th and 31st of October, and 5th and 11th November.

Security guards at St. George’s University, outsourced to the multinational contractor Noonan, will soon be balloted for strike action. The guards are demanding to be directly employed by the university. UVW will also ballot security guards at the University of East London (UEL), who despite being direct employees of the university since April 2019, have been kept on their old pay and terms & conditions.

A security guard at UEL, who wishes to remain anonymous, has said:

“Being in-house on the old outsourcing terms and conditions feels like a servant being told to eat his meal at the masters table, so you think you are better because your seat has changed but your meal is the same. We feel exploited by the fact that TUPE legislation is meant to protect us and not used to trap us in contractors’ terms and conditions. It is demoralising. We feel like second-class workers while we do the crucial job of keeping all the staff and students safe.”

Workers at the 3 universities will be joined by hundreds of other workers, in what UVW has dubbed an “Autumn of Discontent” with simultaneous strikes of over 170 cleaners, caterers and porters from St. Mary’s Hospital, playground attendants from the Royal Parks and cleaners from both the Ministry of Justice (MoJ) and 200 Gray’s Inn Road, the headquarters of ITV and Channel 4. All of these workers are migrants.

Planned strike dates are as follows:

Our members’ demands are as follows: