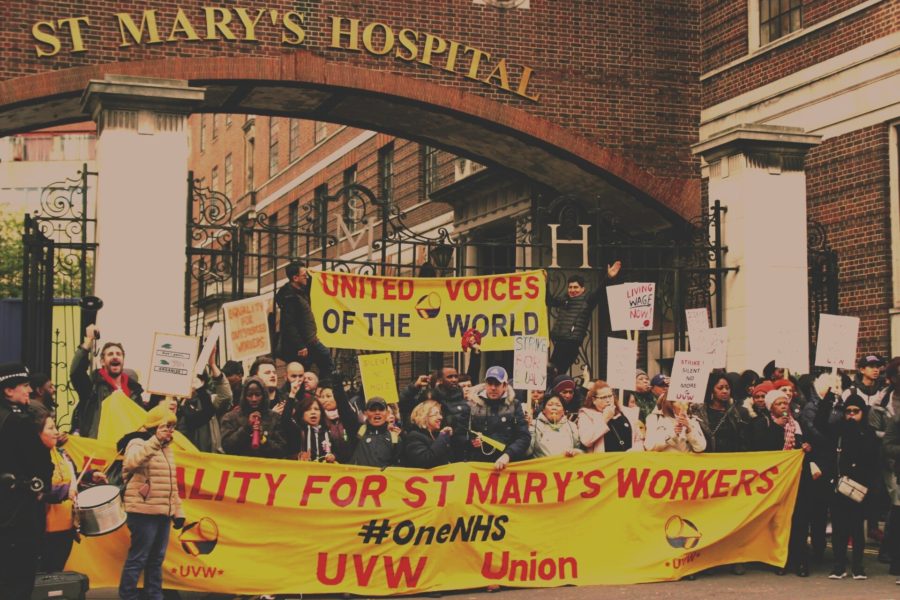 Hospital cleaners, caterers and porters declare indefinite strike action in what will be one of the longest strikes in the NHS’ history

The announcement of an indefinite strike commencing in January 2020 is the latest turn in an ongoing dispute between cleaners, caterers and porters and Imperial College Healthcare NHS Trust. So far the strike has seen hundreds of workers and supporters picket and peacefully occupy St Mary’s hospital, Charing Cross and Western Eye hospital, all of which are a part of Imperial College Healthcare NHS Trust.

Petros Elia, a UVW organiser says, “This will not only be one of the longest strikes in the NHS’ history for any group of workers, but it is also the first time a group of outsourced works are striking to be brought in house as NHS employees. We cannot allow for there to be a two-tiered racially divided workforce within the NHS, and we won’t stop striking until that is put to an end. If Scotland, Northern Ireland and Wales can do away with outsourcing cleaners, caterers and porters in hospitals, then England can and should as well.”

The strike action has been endorsed by clinicians at St. Mary’s; with 50 doctors having recently signed an open letter to Imperial Trust CEO, Tim Orchard, calling upon the Trust to meet the workers’ demands and make them direct employees. In the letter, doctors state that, “workers employed by Sodexo feel undervalued, demotivated and unsupported and have been left with no option but to vote for industrial action,” and that, “The signatories of this letter stand in solidarity with striking workers. Sodexo must do more to give them a fairer deal and it is incumbent upon the Trust to help enforce this change”.

One striking worker said, “I work 55 hours a week just to cover my rent. This is my home; I spend more time here than in my house. Yet I am treated like a dog and made to feel like dirt”.

Planned strike dates at St. Mary’s hospital are as follows:

The demands of the cleaners, caterers and porters are as follows: