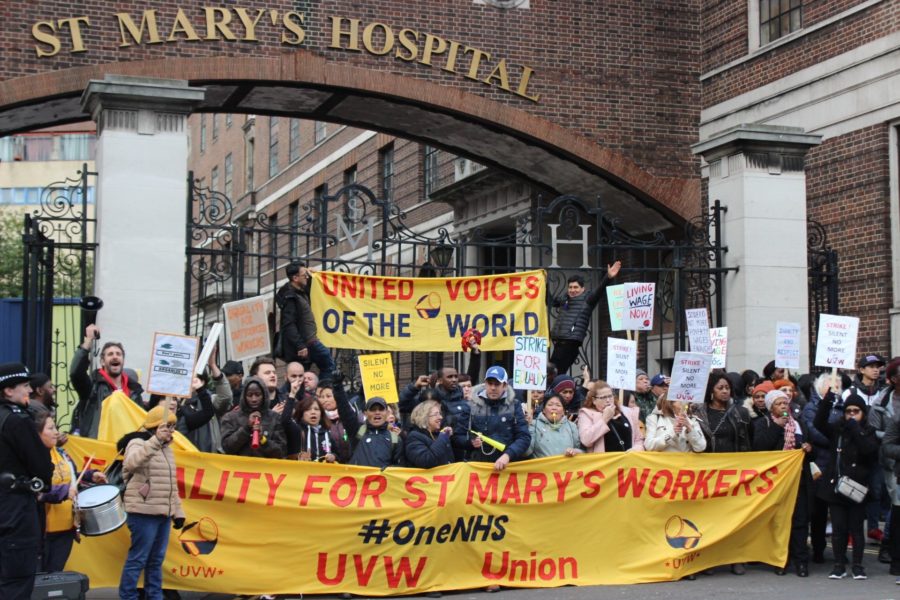 Major NHS Trust forced to terminate use of private contractors

Major NHS Trust forced to terminate use of private contractors

Workers at St. Mary’s Hospital are celebrating a historic victory today after Imperial College Healthcare NHS Trust announced it would in-house the entirety of its cleaners, caterers and porters within the next 2 months. Several hundred workers, outsourced for over 3 decades to global giants such as Sodexo and ISS across 5 hospitals belonging to Imperial Trust, will now enjoy the same pay and terms and conditions as NHS staff. The announcement marks the end of a three month long industrial dispute between the Trust and trade union United Voices of the World (UVW).

Petros Elia, the organiser of the strikes and UVW co-founder said the following: “Today marks a huge victory not just for these brave workers, but for all outsourced workers in the NHS. Our members were told they would never win this fight, but with the full backing of UVW and mass picketing, blockades and occupations they’ve won against all odds. This victory sets a historic precedent which we hope other workers will follow in demanding an end to outsourcing across the NHS.”

Petros continued, “this is also a victory for patients. Study after study shows hospitals that outsource their ancillary staff have higher incidences of infections, including MRSA, and patient complaints are higher when it comes to hygiene and cleanliness. Cutting out profit hungry contractors will allow the Trust to put patient health and safety first.”

Loretta, a worker who was instrumental in organising her colleagues, said: “In November our strikes forced them [the Trust] to pay us the London Living Wage, it meant we got an extra several hundred pounds a month, but it wasn’t enough. We thought, “why shouldn’t we be paid like all other NHS workers?” and we kept on fighting for full equality. Now I won’t have to choose between paying my rent and protecting my health. Striking was not an easy thing to do, but we’ve proven that by sticking together, and by having the support of the amazing union UVW, that workers can win for themselves and patients up and down the country.”

For more quotes, photos and any other enquiries contact:

Outsourcing and the NHS

The outsourcing of cleaning, catering and portering services have been outlawed by all devolved governments since the early to late 2000s.

Link to our report on site here

Prior to winning an unconditional commitment from the Trust to increase their pay from national minimum wage to the (now old) London Living Wage of £10.55 per hour – secured after their third day of strike action – the workers did not receive occupational sick pay, annual leave allowance or pension contributions above the statutory minimum. The victory means that the workers will receive hugely improved T&Cs and an extra £6,000 – £10,000 per year compared to their former pay on the national minimum wage; with those previously on £6.16 per hour receiving an 83% pay rise to £11.31per hour and those on £8.21 per hour a 57% pay rise to £12.92.