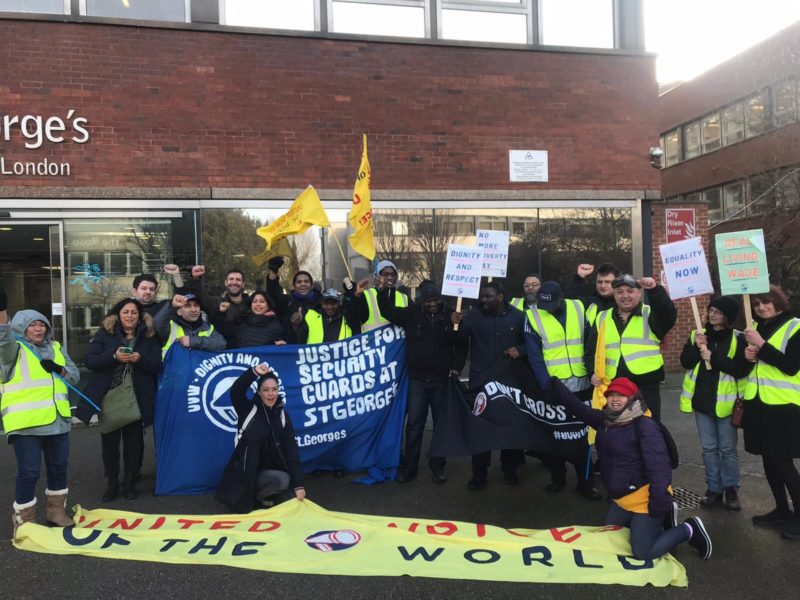 On Friday, January 24th 2020, UVW asked union branches, CLPs and community organisations for group and individual signatories to a solidarity letter for striking security guards at St. George’s University of London (SGUL). The letter asks SGUL to meet the workers’ demands and condemns police action on the picket line.

Security guards are currently outsourced to a multinational corporation, Noonan Services. They are asking to be brought in-house and given equal pay, terms and conditions to the rest of SGUL staff. Two weeks ago, the security guards were met with unlawful strike breaking tactics on their first day of picketing. UVW’s Head of Legal Franck Magennis was unlawfully arrested and the police have continued to intimidate and threaten workers on subsequent strike days. This sort of anti-strike activity by the police must be challenged in the name of workers’ rights and citizens’ civil liberties across the entire UK.

If you would like to sign the letter – as a union branch, group or individual – please email info@uvwunion.org.uk.

The solidarity letter and signatories can be found below.

We, the undersigned, wish to express our solidarity with the security guards of St. George’s, University of London (SGUL) who are taking ongoing strike action in their fight for dignity and equality and to be brought in-house at SGUL.

We also condemn in the strongest possible terms the decision of SGUL and St. George’s University Hospitals NHS Foundation Trust (“St George’s Trust”) to call the Metropolitan Police to the peaceful picket line of security guards on 13th and 14th January 2020. The police threatened all of the striking workers and supporters with mass arrest if they continued their lawful picket line outside their place of work.

On 13th January Mr. Franck Magennis, a barrister at Garden Court Chambers on secondment to UVW as head of their legal department, was unlawfully arrested and is currently suing the police. Franck’s arrest, and the threat to arrest the security guards on strike, is an affront to their human rights to which SGUL and St George’s Trust are complicit.

We do not accept that there is any excuse to continue to maintain a two tiered, racially segregated workforce at SGUL and call on Professor Jenny Higham, Principal of SGUL, to meet the security guard’s demand to bring them in-house as university employees.
We also call on Jacqueline Totterdell, Chief Executive of St George’s Trust, as well as Jenny Higham, to guarantee to desist from calling the police to break up peaceful and lawful picket lines at SGUL.

The Network for Police Monitoring

Grace Blakeley, *Author of Stolen: How to save the world from financialisation* and Staff Writer, Tribune

Jack Shenker, Journalist and Author of Now We Have Your Attention