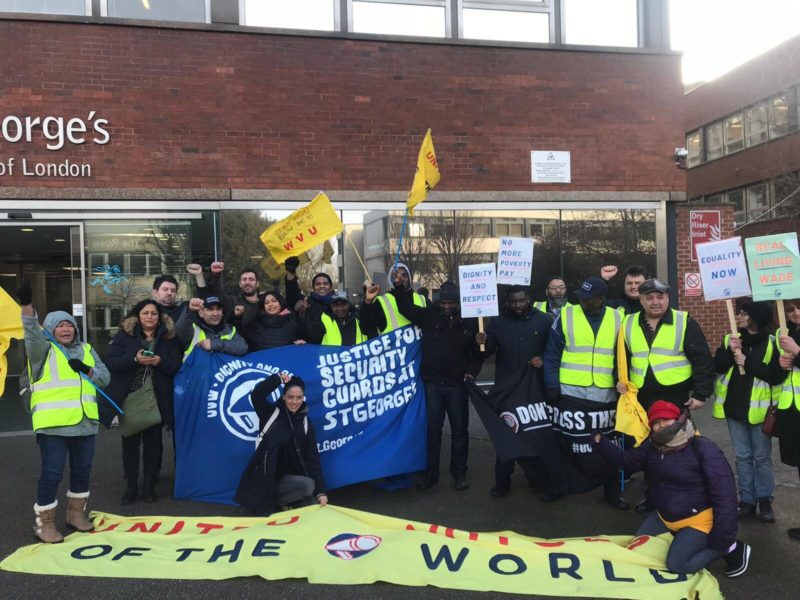 Outsourced security guards at the prestigious medical college of St. George’s, University of London, entered their third week of strike action today. The security guards, who are outsourced to outsourcing giant Bidvest Noonan, are demanding to be made direct employees of the university and to enjoy the same level of pay and terms and conditions as directly employed SGUL staff. The guards’ salaries currently fall far below that of the lowest paid SGUL employee and they only receive the statutory minimum with respect to sick pay, annual leave allowance and a host of other rights.

The dispute has seen Jenny Higham, Principal of SGUL, and Jacqueline Totterdell, Chief Executive of St. George’s University Hospitals NHS Foundation Trust, sanction the calling of police on workers exercising their human and legal right to picket their place of work. The use of these heavy-handed tactics recently led to the false imprisonment and unlawful arrest of barrister and trade unionist Franck Magennis – who as a result is now taking legal action against the Metropolitan Police – and has seen scores of workers and union officials unlawfully threatened with arrest. The chilling assault on civil liberties and workers’ rights has led 90 trade unions, politicians, authors, councillors and community groups to condemn SGUL and St. George’s Trust for refusing to enter into negotiations.

Cetin, one of the striking workers said, “We won’t stop striking until we have equality, what we do is essential to the running of the university, so we don’t see why we can’t be employed directly, and we don’t understand why they [SGUL management] think it appropriate to call the police on us; we’re not criminals we’re their colleagues”.

Petros Elia, a UVW official and organiser of the strikes said the following, “These workers aren’t asking to break the bank; they’re simply asking for equality. They’re forced to come into work when sick or injured because they don’t have sick pay, their annual leave entitlement is far below that of any SGUL employee and their employer pension contributions stand at a measly 2%. They don’t deserve to be treated in this way and it is absolutely shameful that they keep being threatened with arrest. This entire dispute could be avoided if SGUL simply did the right thing and brought these workers in-house. Something we know they can do given that an SGUL authored report found that the university makes an overall saving of £200k per annum by doing so. If SGUL continues to refuse to negotiate then UVW will take steps to escalate this situation”.