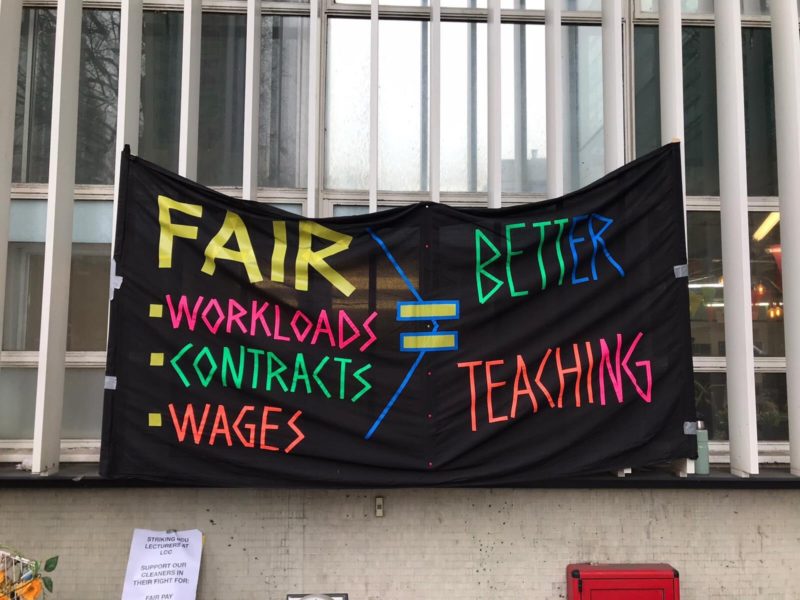 United Voices of the World (UVW) stands shoulder to shoulder with the brave UCU comrades on strike across the country.

UVW believes that all workers have the right to decent pay, terms and conditions and a liveable pension. We are against the casualisation of employment and decimation of security granting benefits like university staff pension schemes. Wages and terms and conditions should not be set by bosses but democratically and collectively agreed by workers. Attempts to slash them should be forcefully resisted, like UCU is doing now.

We believe that a 17-20 % drop in pay** for higher education staff is unacceptable and must be reversed as soon as possible. It is outrageous that UCU members now have to pay around £40,000 more into their pension but receive almost £200,000 less in retirement***. This increase in payment is an egregious attack on staff’s later in life security.

We commend the UCU members in over 70 Universities up and the down country for taking a stand against the rise of precarious and unsustainable work in higher education. We’re inspired by UCU’s creative, pedagogical picket lines and honoured that our Design and Cultural workers had a chance to show solidarity via a “Why unionise” teach-in at London College of Communications.

The UVW joins the union movement in demanding that universities sit down and negotiate with the UCU over pay, conditions and rising pension costs.

We also note that Professor Jenny Higham, a board member of Universities UK, is also Principal of St. George’s University of London, where UVW has a live dispute over the outsourcing of their security guards. Your struggle is our struggle. We look forward to working in solidarity with UCU members in whatever capacity possible.

Together, we will win!

**Findings from Universities and Colleges Employers Association (UCEA), show that the pay of higher education staff has dropped by around 17% in real-terms since 2009. UCU says that staff pay has actually fallen by around 20% if analysis covers the cumulative impact of the overall pay awards each year versus inflation.

***Changes made to the Universities Superannuation Scheme (USS) since 2011 mean that a typical member will pay. This results in an increase in payment from 6.35% to 9.6% of an employee’s salary.