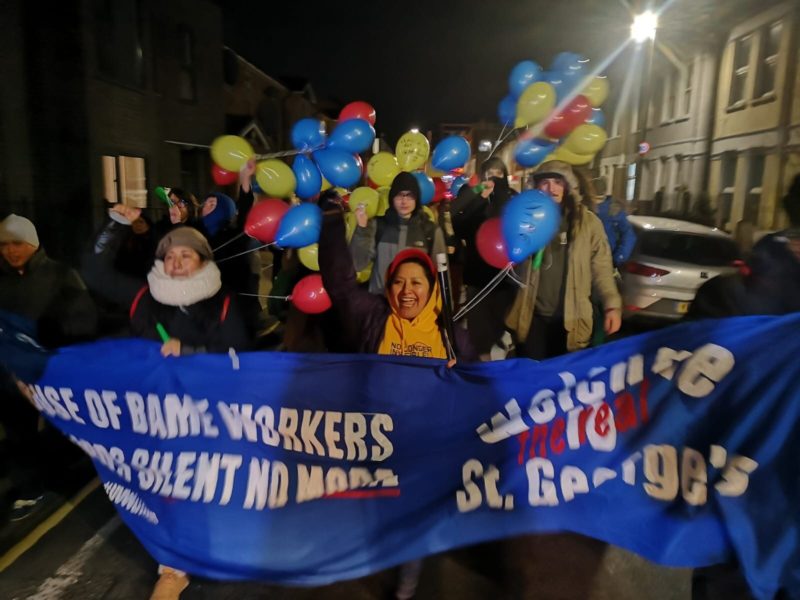 We are dismayed with your recent statement in respect of the ongoing security guard’s strike at St George’s university (SGUL) which fails by any measure to offer them any genuine solidarity.

In fact, your statement is best characterised by straw-men, vacuous platitudes and management-speak. Some of your points are near verbatim regurgitations of the SGUL director’s own spin.

If you want to get on the right side of history and show genuine support to the security guards in their fight for racial and economic equality then we invite you to meet with all of them and their union to discuss how you can best do that.

In the meantime, we would ask that you do the following:

i) Table a motion in the SU noting that the SU:

iii) Release a fresh statement calling upon SU members and the wider student and staff body to support the next picket line of security guards.

Anything less than these 3 acts of solidarity would be lip service at best or, at worst, would amount to outright or complicit support for SGUL’s two tiered, racially segregated workforce and their attempt to criminalise lawful resistance to it.

We will now respond to each of the points in your statement:

The dispute has been live for the past 8 months and has consisted of intermittent strike action for the best part of 2 months. Confirming your sudden “awareness” is utterly inane and no expression of solidarity whatsoever.

Few would not advocate for equal opportunities, and whilst the security guards are denied equal opportunities at SGUL by virtue of being outsourced to a private contractor, their dispute is only tangentially connected to that issue.

As you are fully aware, the security guards are not striking for equal opportunities, but racial equality, equality of treatment and equality of pay and terms and conditions with SGUL staff. In other words, they are striking against a two tiered, racially segregated workforce.

In fact, they are now suing SGUL in a landmark legal case to prove SGUL’s decision to outsource an entirely migrant and BAME workforce on unjustifiably inferior pay rates and terms and conditions of employment amounts to race discrimination which is unlawfully in breach of the Equality Act 2010. Even without a court’s ruling on the matter it is abundantly clear that this arrangement is racially segregationist and morally reprehensible and should have no place at SGUL or any university in the UK.

It is astounding that the relocation of a charity event should be the only fact that has provided the SGUL SU with cause for concern, whilst the celebrity comedians were supportive of the decision to relocate in light of the fact that to perform at SGUL in the midst of dispute for racial equality would be to normalise and complicitly support it.

And to express concern at the relocation of a charity event whilst remaining completely silent on a number of injustices that SGUL SU – or any SU for that matter – should vociferously condemn speaks volumes to the moral integrity of SGUL SU.

These injustices include the decision of SGUL to call and encourage the police to intimidate and dispel with security guards from their lawful picket line with threats of arrest. That decision led to the unlawful arrest of a barrister, Mr Magennis, who is now suing the police. The solicitor representing Mr Magennis has said that his:

“his arrest clearly raises important constitutional issues. We will be looking at all legal avenues to ensure that the police are held to account, that trade union members are not criminalised for going on strike, and that people are not arbitrarily arrested. The police must respect and uphold union members’ right to protest.”

That the SGUL SU wilfully refuses to condemn the universities decision to involve the police in an industrial dispute or condemn the threats of arrest its security guards on SGUL premises and the unlawful arrest of someone supporting them, speaks volumes to the SU’s moral integrity and prejudices.

It is also noted that the SGUL SU is completely silent on the fact that SGUL directors have so far refused to communicate with, let alone negotiate with the security guards over their demand to be treated as equals and made employees of the university. It is the arrogant reticence of SGUL’s directors which has forced the security guards to strike and which ultimately led to the relocation of the BHF’s fundraiser, something SGUL SU appear to loathe to acknowledge.

4) SGUL SU “have met with one of the lead Security Staff members on strike, Cetin Avsar, to discuss ways in which we are able to support while also protecting the service we provide to our students”

Notwithstanding SGUL SU’s commitment to support these strikes, it is concerning for a number of reasons that you will only offer support that is conditional upon “protecting student services”. Whilst there is no desire disrupt any student services, we would have expected the SU’s support to be unconditional for a campaign to end your the two tiered, racially segregated and potentially unlawful practice of outsourcing.

Secondly, as noted above, the only event that has been disrupted has been a comedy fundraiser that was relocated to another venue. In no way does this amount to a disruption to student services.
The official university line was that the relocation was in anticipation that the event might be jeopardised by a protest. This appears to be the SU’s line too. However, the celebrity comedians were more than happy to relocate in light of the fact that they would be performing in the middle of an ongoing dispute for racial equality and the SU could and should have relocated the event in proud solidarity with the security guards.

One way to support these strikes is to ensure that no other such events take place at SU until racial equality is achieved. If business is allowed to continue as usual, as you appear to be suggesting, then that will fundamentally undermine the efforts of the striking security guards and continue to normalise and legitimise racial segregation at SGUL.

5) SGUL SU is “independent of the University”

The NUS, as well as dozens of other organisations and trade unions have offered unconditional support to the security guards in their dispute and sincere condemnation of the University’s handling of it. Conversely, SGUL SU has only managed to muster together a statement which offers no genuine or meaningful solidarity to the security guards and instead shows considerable deference to SGUL directors and implicit sympathy and support for their position.

Therefore, whilst the SGUL SU may be technically independent of the University the independence professed is patently in name only.

6) SGU SU are “ultimately not able to make the final decision on such complex matters” and you “wish the Security Staff the best in seeking a resolution with their employer, Bidvest Noonan”.

No-one has suggested that the SU is a decision maker in this dispute. Stating otherwise is a straw man which appears to have been erected for the purpose of deflecting scrutiny of the SU’s failure to support the security guards.

You also state that the issues of dispute are very “complex”. Nothing could be further from the truth. The false characterisation of the dispute as complex only serves to offer support for the Universities inexplicable delay and, to date, refusal to meet the security guards’ demands.

Outsourcing at SGUL has created a two tiered, racially segregated workforce where an entirely migrant and BAME workforce are treated second class and given second class pay rates and terms and conditions. They are asking to be treated as equals. SGUL’s own internal report from the former directors of facilities at SGUL concluded that bringing them and all outsourced workers in-house would be better for the workers, better operationally, better reputationally, and better financially in that savings could be made to the tune of around £200k a year.

The demands are simple and the solution is simple. There is nothing complex about it and a growing number of universities in the University of London and beyond, and NHS Trusts, are beginning to end decades of outsourcing in recognition that to do so undermines their Public Sector Equality duty as well as being morally reprehensible.

7) SGUL SU “wish the Security Staff the best in seeking a resolution with their employer, Bidvest Noonan”.

This is perhaps the most pernicious of your statements and one which is right out of SGUL’s director’s book of spin.

To deny that this dispute is with the University is clearly an attempt to support and defend the University’s attempt to wash their hands of responsibility towards the security guards and to deflect public scrutiny of their actions.

We trust you will revisit your position in regards to his dispute and hope that we can work together to bring an end to racial segregation at SGUL.