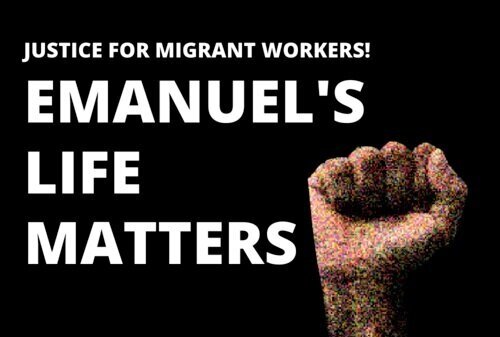 International Workers Day: We are all Emanuel declare UVW members

The lockdown did not stop the UVW family from coming together on International Workers’ day to celebrate 100 years of worker wins and plan next steps in the fight back for safety, dignity and respect at work.

UVW members joined together on 1 May for an online multi-lingual festival packed full of storytelling, a workers’ rally with international guests and a quiz by the cultural workers’ sector.

The event commenced with a minute’s silence to honour the life of Emanuel Gomes, a Ministry of Justice (MoJ) worker, who died of suspected COVID19. Bianca Todd, social educator and community organiser, then started an origins of Mayday session by stating; “My working class roots are important to me, I come from a family of storytellers. I am the granddaughter of Ron Todd, the former general secretary of the Transport and General Workers Union. Ron was best known for his passion for peace and his commitment to international human rights. With our slogan ‘Looking back to fight forward’ I thought I would share the story of May day”

The UVW story, from its humble beginnings with just a handful of cleaners, to the respect, dignity and real financial gains delivered by the UVWs 30 disputes were reflected on by co-founder and organiser, Petros Elia. He emphasised the importance of the direct, coordinated, community wide action, delivered by the UVW solidarity network and members – now 3, 500 strong.

Petros continued and whilst drawing parallels with the Chicago workers’ struggles in the 1800s and today’s fight for PPE, sick pay, a living wage, and a workplace free from fear by the migrant, low paid and precarious workers stated “If any bosses throw our members under the bus during this crisis, we will invite them into the ring when the lockdown is lifted and we will be knocking them down”

Vania, a member of Las Kelly’s, a grassroots sister union in Spain also participated “Our biggest message to everyone now, during this crisis, is we need to organise. No one will get anywhere with individual aspirations” she stated.

In closing the festival, UVW members were reminded of the direct call, earlier in the week, for support from MoJ workers including Fatima who said “We are appealing to everyone. We have a colleague that died on Friday last week. There is someone else that we have heard died from maintenance. We don’t know what is happening. We are appealing to everyone to help us…” this alongside news about the lack of a meaningful response by the MoJ resulted in members pledging to take direct action to make sure Emanuel’s death was not in vain.

The evening ended with a rousing rendition of the newly launched combative UVW anthem.

Bianca Todd, is the co-creative social educator, championing collectivism as a community connector.

Founder of Ron Todd Foundation – a charity established in memory of former general Secretary of the TGWU; championing collectivism to prevent and provide relief of poverty and social injustice

Director of Everyday English – utilising an intercambio approach to exchange language and culture, creating a safe place and a sense of belonging.