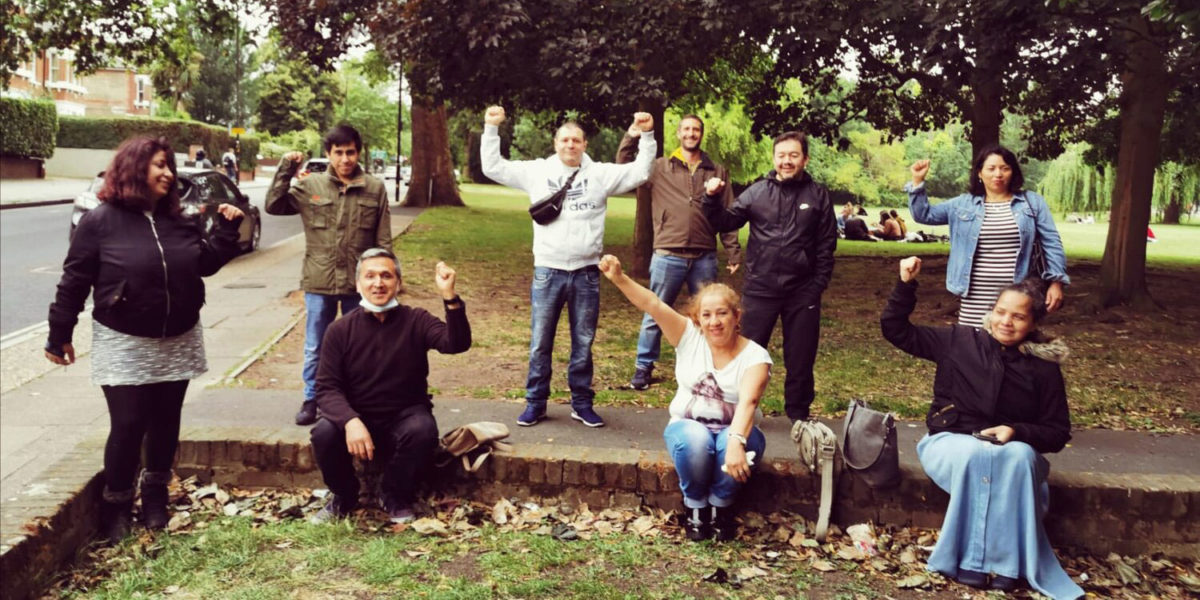 Outsourced cleaners at Ark Globe Academy have won a stunning victory today after it was announced that they would receive the London Living Wage, full pay sick pay in parity with directly employed Ark staff, and the immediate implementation of an enhanced Risk Assessment process from the 1st of September.

The announcement, made by the cleaners’ trade union, United Voices of the World (UVW), comes after a campaign which also demanded the immediate abolition of gender disparity in pay, trade union recognition, and an end to outsourcing at the academy. And which saw the union threaten strike action if its demands were not met.

The dispute began after workers staged a spontaneous walkout on the 4th and 5th of June in response to what their union has described as months of unlawful wage deductions and fears over a lack of Personal Protective Equipment (PPE) or a meaningful Risk Assessment having been carried out.

The dispute swiftly came to a head after it was revealed that the Regional Manager. Emma McNabola, of the contractor Ridge Crest had attempted to bribe the cleaners with PPE in exchange for them leaving the union. With Ms McNabola being recorded telling a strike leader that she could, “pick you up some masks from the office and drop them into you…and it means everybody goes back and gets rid of the union” and that “I just wanna shut the union down”.

Something which UVW has denounced as “unlawful and disgraceful union busting” and which saw Labour MP and Shadow Secretary of State for Employment Rights Andy McDonald brand a “flagrant attempt at union busting by blackmailing staff over PPE”.

The union has vowed to pursue a collective employment tribunal claim against the contractor for trade union victimisation and has also vowed to pursue legal action against Ark Schools if it refuses to bring the workers in-house.

The legal action would be the latest step in an ongoing campaign by the union to establish that the outsourcing of BAME and migrant workers onto inferior levels of pay, and terms and conditions of employment, is indirect race discrimination and a breach of the Equality Act.

Julio Fernando Mier López, a strike leader, said the following: “We were underpaid, undervalued, badly treated, and often humiliated. All of us were not being paid properly, I had one colleague who worked 69 hours and they [Ridge Crest Cleaning] paid her nothing, she had a 0 on her pay slip. I’m not a confrontational person, but I knew enough was enough and that we had to take action. We tried to tell them so many times about the problems and they just didn’t care. After the recordings came out and everyone knew they had bribed us with PPE they threatened me with a letter as a way to intimidate me. But we aren’t backing down, we’re happy we’ve won the battle, but we know we still need to win the war.

Petros Elia, a UVW Organiser said the following: “This victory will be celebrated but the fight continues for full equality. And Ark Globe Academy will not be forgiven for having forced the cleaners to get by on poverty pay and no proper sick pay for so long. And we will make sure that Ark holds their contractor to account for having flagrantly engaged in vile union busting antics with an express intent to “shut the union down” and literally force the cleaners to choose between their health or their human rights. We are very clear, we will not be going anywhere, not until these workers are brought in-house and Ark comes to the negotiating table”.

An edited transcript of the union busting can be found here: https://www.uvwunion.org.uk/news/2020/7/uvw-makes-transcript-available-of-union-busting-phone-calls-from-ark-globe-academy-contractor