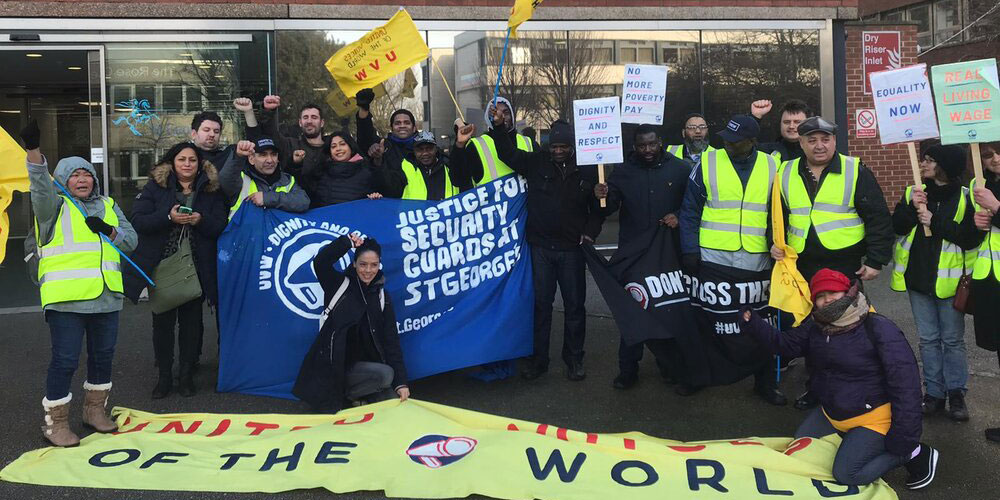 Security guards at St. George’s University of London are celebrating after winning 3-weeks full pay sick pay. The victory marks the latest turn in a several months long dispute which has seen the guards take successive weeks of strike action, direct action, and most recently, spontaneously walking off the job due to a lack of Personal Protective Equipment (PPE), contractual sick pay, and safety concerns.

SGUL contractor Bidvest Noonan originally presented the offer of full pay sick pay – the workers previously received Statutory Sick Pay (SSP) of £19.17 per day – as part of a package which would see their hours decrease. However, the workers succeeded in forcing Bidvest Noonan to withdraw the reduction in hours and instead one a one hour paid lunch break previously denied them.

Despite the victory the workers have vowed to continue campaigning until they received full equality and  made direct employees. The most recent escalation in this ongoing dispute being a legal challenge against the university which will argue that outsourcing the entirely BAME and migrant workforce on inferior pay rates and terms and condition to university staff amounts to race discirmination in  breach of the Equality Act 2010 and the Public Sector Equality Duty.

Cyril Hawkin, one of the security guards, said the following: “I was shocked when they offered me the ‘pay rise’ and expected me not to notice that they were reducing my hours. They even went so far as to offer me the position of Supervisor, even though I’d actually be earning less than a Security Officer does now. We knew the offer was preposterous and we rejected it but we made clear that we would be taking full pay sick pay and that with our union we will keep on striking and fight on for full equality”.

Petros Elia, a UVW Organiser, said the following: “The offer of full pay sick pay is welcome but it isn’t enough. It’s only for 3 weeks and well below what university staff get. St. George’s has treated these workers like second class people and we’ll continue to fight through strike action and legal action until  St George’s university’s racist employment practices are rooted out.”

For more quotes, information, or a copy of the legal challenge please contact: