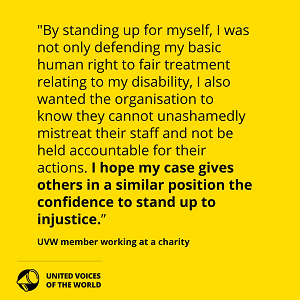 A United Voices of the World (UVW) member, Zara*, recently settled an Employment Tribunal case out of court for over £20,000. Zara worked at a charity, and experienced sustained discrimination and bullying by management. Diagnosed with multiple learning disabilities, she felt isolated and afraid to ask for help. Alongside a mental health advocacy group and UVW, she stood up to her bosses and received full compensation.

Zara was invested in the charity’s objectives before she started working there – like many charity workers, she felt the work her organization did was important. She frequently went above and beyond for her employers.

She’d heard some rumours that working at the charity was difficult, but her first year went okay. She excelled at most aspects of the job, but problems began when she struggled with one specific task – one she only had to perform every few months – and her supervisors chastised her rather than providing her with adequate training.

For months after, Zara struggled with a stern and critical line manager who micromanaged everything she did and a seeming lack of trust from her superiors.

When asking for help with the specific task she struggled with, her manager asked her, clearly annoyed, over the phone, “Is there something you don’t understand? What is it that you don’t get?”

Zara’s specific learning disabilities made it difficult to focus under that sort of stress, and the way her manager spoke to her brought up childhood trauma from interactions with teachers at school.

Her manager continued to bully her for her supposed ‘incompetence’, but eventually Zara stood up for herself, explaining in a meeting that her difficulties with the task had nothing to do with incompetence. It was because of a lack of training and adequate adjustments accommodating her disabilities and learning style.

After a particularly awful employment review, Zara raised a grievance over being criticized for her disabilities.

The grievance wasn’t taken seriously, and so Zara went on to claim constructive dismissal, discrimination and harassment. Her case was solid, she had almost everything in writing, and she settled out of court for full compensation.

Zara explains that, “by standing up for myself, I was not only defending my basic human right to fair treatment relating to my disability, I also wanted the organisation to know they cannot unashamedly mistreat their staff and not be held accountable for their actions. I hope my case gives others in a similar position the confidence to stand up to injustice.”

Zara’s UVW caseworker adds that, “settling out of court meant that the case won’t be public knowledge, but we see mistreatment in charities and disability discrimination all the time. Charity sector bosses must be held accountable for their actions, just like any other boss.”

*The member’s name has been changed to preserve anonymity of the case.