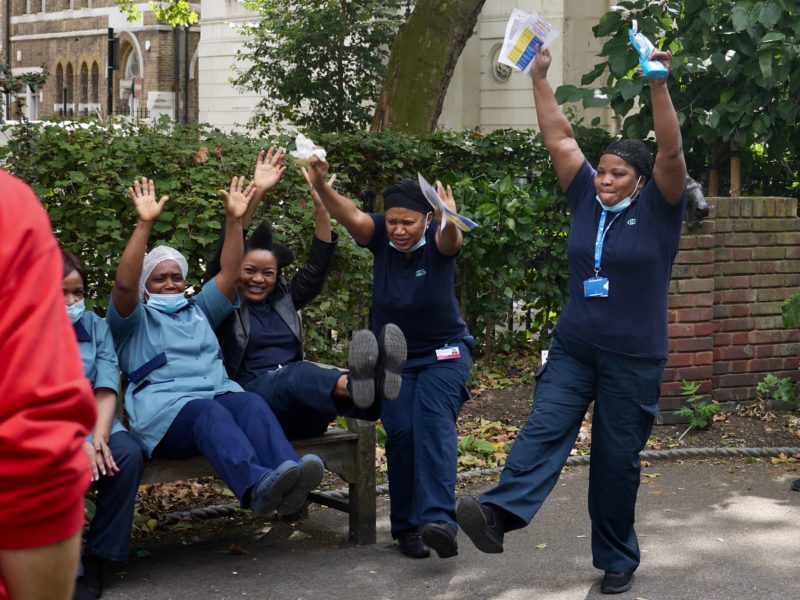 World renowned Great Ormond Street Hospital for Children (GOSH) has declared it will end outsourcing and bring hundreds of cleaners into their direct employment from 1st August 2021. The decision follows a successful campaign from the cleaners’ trade union United Voices of the World (UVW).

Currently outsourced to OCS, the cleaners – almost all of whom are Black, Brown and/or migrants – joined UVW at the start of the Coronavirus pandemic in protest at what they described as “institutional racism” as they received far worse pay rates and terms and conditions than their majority White in-house colleagues, including only being given Statutory Sick Pay of about £19 a day rather than the  NHS’ full pay sick pay rates.

The workers also reported being overworked, left without adequate equipment and uniforms and alarming incidents of what they described as bullying, harassment and discrimination at the hands of OCS managers.

The cleaner’s complaints, along with a 45 page report which laid out a comprehensive case against outsourcing, including how it contributes to higher rates of Hospital Acquired Infections and could be detrimental to the effective handling of Coronavirus, was presented to the board of GOSH in November 2020.

The Trust’s initial response was to deny responsibility for the cleaners which led UVW to take steps to serve notice of its intention to ballot for strike action. Buttressing the threat of strike action was a unanimous vote in favour of strike action in a consultative ballot of the cleaners that took place weeks previously.  In addition, UVW had threatened legal action against GOSH on the grounds that their outsourcing arrangement amounted to unlawful race discrimination in breach of the Equality Act 2010.

Tensions between the GOSH and UVW recently came to a head after several members of UVW were ejected from a public GOSH board meeting and several other cleaners denied entry after calling on the Board to rethink its position and negotiate.

Petros Elia, UVW Co-Founder and Organiser said the following: “This victory is historic. It shows, firstly, that workers united with a union ready to back them really can move mountains. It also shows what we have known all along, that outsourcing is a choice, and one grounded in Thatcherite ideology, and that as easily as the NHS and other public institutions outsourced thousands of workers at the stroke of a pen 30 odd years ago, so too can they can now choose to in-house them at the click of a mouse. The cleaners at GOSH are heroes, and not because they were clapped for their work during the pandemic, but because they fought and won what they knew those claps could never deliver. This is the second time in 2020 that UVW has forced an  NHS Trust to end outsourcing.  If UVW can do that twice in one year, imagine what the whole union movement could do if they took on outsourcing together. UVW looks forward to working with GOSH to ensure a smooth transition in bringing the cleaners in-house”

GOSH cleaner, Evelyn, said the following: “I am very, very happy with this victory. After 11 years of service in this hospital it is my great joy for my colleagues and me to become NHS staff thanks to UVW. With UVW we have protection, freedom, solidarity, and respect”.

GOSH cleaners Genevieve said the following: “Being in-house and an NHS staff member is the best thing that has happened to me. I never thought that it would be possible, but with UVW by our side, we were victorious. We can now get all the fringe benefits that the NHS offers and we will no longer have to come to work when you are sick. There’s a possibility of excelling with the NHS. Thank you to UVW. UVW is the union. Yes, they can!”

GOSH cleaner, Alpha, said the following: “We cannot thank UVW enough for ending the discrimination and disrespect that we have been facing for many years. By uniting with my colleagues and preparation for battle with the full support of UVW we succeeded in pressuring GOSH to bring us in-house. We wouldn’t have ever dreamt about this without UVW”

Another cleaner at GOSH said: “I’m so pleased about our victory even though we have ended up where we deserve. From 1 to 10 I will say this victory is a 10 because and the best Christmas gift ever after a long struggle”.