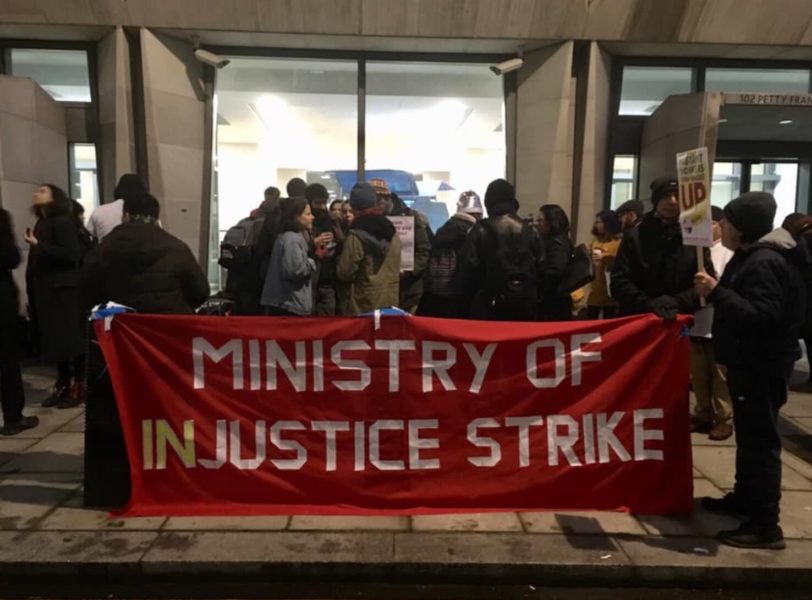 The Ministry of Justice (MoJ) has come under fire today after trade union United Voices of the World accused it of ‘slapping cleaners in the face’ with an offer of a 14p pay rise. The offer has come just weeks after the department was publicly criticised for its treatment of BAME and migrant workers after the death of outsourced cleaner Emanuel Gomes on the 23rd of April from suspected COVID-19 and after several cleaners walked off the job citing a lack of Personal Protective Equipment and a breach of social distancing rules.

The pay rise has been branded ‘insulting’ by the trade union United Voices of the World who has been in an industrial dispute with the department since 2018. The union has previously organised several days of strike action by outsourced cleaners at MoJ headquarters in Petty France and has demanded the London Living Wage and that workers receive the same Occupational Sick Pay and annual leave allowance as civil servants. In response to the pay rise the union has announced its intention to ballot its members for further strike action and of its intention to take legal action against the department.

Fatima Djalo, one of the outsourced cleaners, said the following: “I have no words. The Ministry of Justice is shameful. I couldn’t believe it when I saw the letter. I felt humiliated by this ‘offer’”.

Petros Elia, a UVW Organiser, said the following: “This pay rise is a disgrace. These workers are paid poverty wages and a measly 14p isn’t going to change that – you can’t live in London on £9.22 per hour. But not only that, these workers have been denied occupational sick pay and have been forced to work without face masks and other PPE in this pandemic. Something which is not only callous but criminally negligent. The MoJ has slapped these cleaners in the face with this ‘pay rise’ and we’re not going to stand for it. We’ll be taking strike action and legal action to end this frankly racist practice of outsourcing at the heart of our government’.

United Voices of the World intends to take legal action against the Ministry of Justice at an Employment Tribunal. The case will argue that outsourcing BAME and other workers with protected characteristics onto inferior pay and terms and conditions of employment amounts to indirect racial discrimination under the Equality Act 2010. The case is a landmark legal case and has the potential to benefit the UK’s 3.3 million outsourced workers. The union is also in the process of bring the same case against the Royal Parks and several other employers